The word corruption is a complex and beguile phenomenon. Corruption takes place not only in the finance field, but in multifarious domains. There are many kinds of corruption in our social environment such as administrative corruption, political corruption, and so on. To cover all sorts of corruption is a mammoth task and beyond the scope of my article. Hence, I will be covering the topic of “financial corruption” with a precise analysis.

What is the concept of corruption? Well, fortunately or unfortunately, there is no exact and infallible definition of corruption among scholars. Thus, one of the simplest definitions is as follows:

“Corruption is the misuse of public power (by elected politician or appointed civil servant) for private gain.” (Corruptie.org). 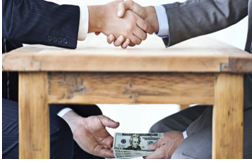 Corruption does not merely refer to the unethical behavior of people in a society. Therefore, to expect to get rid of it by meager punishments and anti-corruption slogans, along with dreaming of a corruption-free world would be utterly naïve. Despite the fact that corruption has now become a hallmark of corrupt people, it is important to understand that human beings are motivated by psychological and biological factors which lead to corrupt behavior. It is a well-known fact that corruption undermines democracy, rule of law, peace, human welfare and socio-economic development. It may be possible to downsize corruption, but it is impossible to steer clear of it completely. The United Nations calculations claim that more than $1 trillion is disbursed in bribes each year while an estimated $2.6 trillion is carried off annually through financial corruption.

Free and competitive markets, capital formation, capital accumulation, free capital movement, luxury goods and services, as well as property rights are some of the factors which may assist in expanding the needs and desires of mankind. However, in the contemporary times, people, institutions and employees are struggling to acquire anything beyond their basic necessities (Food, Clothing and Shelter). It is important to realize that nowadays, the basket of basic necessities also entails capital accumulation. People are ceaselessly struggling to gain access to capital formation and luxury goods and services. As the world is more materialized now, materialism has started to dominate people’s decision making. It will be ignorant of us to say that the rich class is more corrupt than their poor counterparts, or that high level politicians are more corrupt than politicians at lower rungs of the system. This is because corruption is a natural phenomenon which affects people irrespective of class, gender, background, occupation and so on. It is a structural problem in companies where the course of actions is not transparent, where the law is not observed, and observance is not monitored. (Corruptie.Org).

There are corrupt politicians and companies around the world. For instance, Mobutu in Congo, Abacha in Nigeria, Kohl in Germany, and Mitterrand and Chirac in France are some of the epitomes of corrupt politicians. In terms of corruption, even Afghanistan is not far behind. The so-called “creamy class” includes rich politicians, private companies, warlords and public officials who are deeply implicated in bribery. Their act of bribery is not a means to recuperate them from poverty, but to attain capital accumulation in order to be strong capitalists and have a luxurious life.

I disagree to the claim that financial corruption takes place only because politicians and public officials are not paid sufficiently and on time. There is an article on the website Corruptie.Org, (titled: What is corruption?) which discusses this issue- “Timely payment of salaries is an important pre-condition to prevent corrupt behavior”.

There are numerous factors that lead to corruption and bribery among politicians and public officials. Corruption is a serious quagmire for Afghans. There are two main reasons for public officials to lift their hands for bribery. The first reason is that the person who is involved in corruption does not trust the stability of the institutions. He/she is of the belief that the government institutions will collapse soon and the regime will change. Either the Taliban will take over or some other political group. This may disrupt their flow of income. So they collect as much money as possible (either legally or illegally). The second reason to be corrupt is that public officials do not have job security. They may have a government job today but tomorrow they may not. They believe it is best to seize this opportunity today. Thus, they live their entire lives in constant fear of the future. It is because of this fear of contingency that they indulge in various forms of corruption so that they can survive luxuriously in the time lag of getting the next job. So petite salary could be an auxiliary reason to corruption but it is certainly not the main reason.

We live in a dreadfully competitive world. There is competition among nation-states and companies for growth and development. Similarly, there is competition for personal capital accumulation and capital formation, luxurious life, etc. among individuals as well. Thus, their interests take priority over law, morality and fear of punishment. Analogous to other social problems like war, diseases and social violence, financial corruption is also inevitable. Though arduous, it is not impossible to eradicate corruption systematically from our society. Hence, through our consolidated efforts, we can pave the way for a corruption-free Afghanistan.

View expressed in this article are of the author’s own and do not necessarily reflect Pajhwok’s editorial policy.