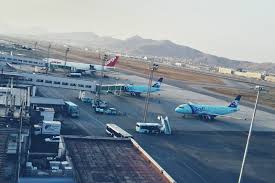 KABUL (Pajhwok): The Taliban has asked Turkey to operate the Hamid Karzai International Airport (HKIA) in capital Kabul but no decision has been made yet, Turkish President Recep Tayyip Erdogan said Friday.

“The Taliban have made a request for us to operate Kabul airport. We have not yet made a decision on this matter,” he told a news conference at Istanbul’s Ataturk Airport before leaving for a trip to Bosnia.

He added: “We will make a decision after the administration (in Afghanistan) is clear.”

Erdogan said a meeting with the Taliban lasting more than three hours took place at the Turkish embassy in Kabul, without saying when the meeting took place. “If necessary, we will have the opportunity to hold such meetings again.”

The president added that the evacuation of Turkish troops from Kabul, which began on Wednesday, was ongoing. He condemned Thursday’s attacks.