KABUL (Pajhwok): Nearly 2,100 people have been killed and injured in 173 attacks in Afghanistan in April showing 15 percent increase in casualties happened in April compared to March.

According to Pajhwok Afghan News daily reports 1,018 people have been killed and 792 others injured in 171 different attacks in 31 provinces of the country in March.

Reports based on different sources showed 1,220 people were killed and 866 others injured in 27 out of total 34 provinces of the country during April.

Statistic showed that in April of every 15 people, eight people suffered casualties in face to face fighting, two in airstrikes and one each in targeted attacks and blasts.

More than half of the April attacks took place in Faryab, Nangarhar, Ghazni, Jawzjan and Kunduz provinces and the remaining attacks happened in 25 other provinces while Pajhwok had no report of violent incidents from Bamyan, Nuristan, Panshir, Paktia, Nimroz, Takhar and Nuristan provinces.

Political affairs expert Javed Kohistani said more attacks had been taking place in Nangarhar because the province has border with Pakistan and the Daesh insurgents were more active in the province.

In Jawzjan and Kunduz, he said the lack of attention from the government, ethnic differences and public disappointment had caused insecurity and provided the chance for insurgent to penetrate.

He added due to above problems insurgents had been more active in these province and where rebels have presence security forces conduct more operations.

Officials of the Ministry of Defence (MoD) acknowledged they conduct more operations in the areas where militants have presence.

Reports showed that last month 1,220 people were killed and 866 others got injured. 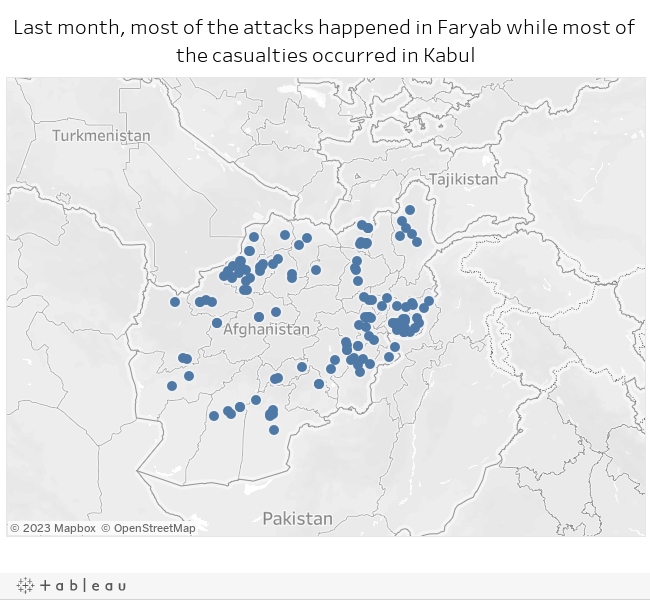 He said that front wars cause more casualties in populated areas such as in Kabul.

The war in current year is more violent

On average, 54 people were suffering casualties on daily basis during the first four months last year compared to 61 people during the same period this year.

Nasratullah Stanikzai, a resident of Qala-i-Wahid area of Kabul, said, “Afghanistan is suffering from a proxy war of others and the victims are only Afghans, I ask all those countries and intelligence circles who are playing war in Afghanistan for their own interests not to kill us anymore,”

He said Afghans were killed under different names in their country while the benefits were sent to others.

Stanikzai asked the Afghan government and militants to reach a peace agreement and put an end to the killing of Afghans.

Abdul Saboor, a resident of Chak district of central Maidan Wardak provinces, said, “I as an Afghan ask the government and the militants to reach a peace, I request them not to kill our people anymore,”

Talking to the warier parties, Saboor said, “For how long our women will lose their husbands, our children orphaned, our country destroyed… lets come and join peace and jointly prevent foreigners’ interference in our country and the bloodshed of Afghans,”