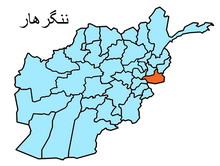 JALALABADCITY (PAN): An explosive-laden tractor was seized by police on the outskirts of Jalalabad City, the capital of eastern Nangarhar province, officials said on Thursday.

The tractor was seized on Wednesday, police chief, Brig. Gen. Ali Shah Paktiawal, told Pajhwok Afghan News. Militants wanted to use the explosives-packed vehicle for a suicide attack, he said, adding homemade four missiles, each containing 20 kg of explosives, were found attached to the tractor’s cart controlled by a remote controlled device, he said.

A man had been arrested in connection with the tractor, the police chief said, but did not provide information about the exact location where the explosives were seized.

The detainee had confessed to the crime during initial interrogation by police, Paktiawal said. The detainee helped transferred suicide bombers and explosives to the city, he said.

He said a huge terrorist attack was foiled with the seizure of the explosives.

The seizure came hours after 15 people, police cadets, were killed when a suicide bomber rammed his explosive-laden car into a bus, carrying police cadets, near the customs house the on outskirts of Jalalabad City.