Residents protest burning of Quran by US troops 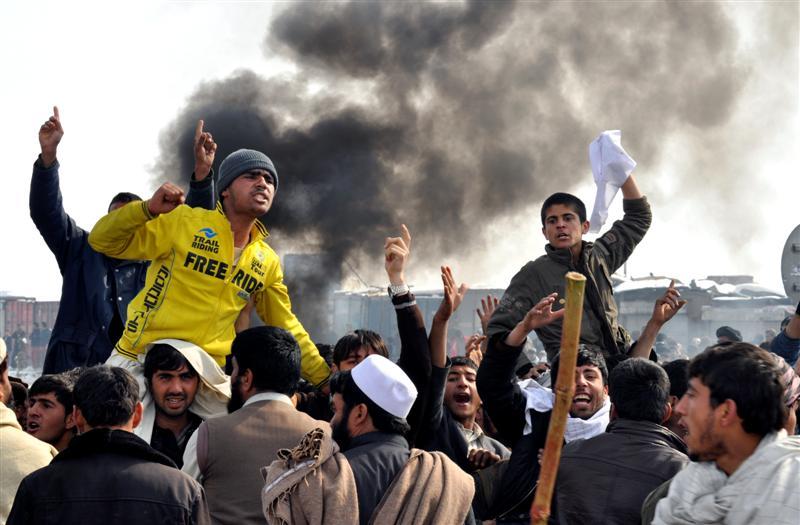 Residents protest burning of Quran by US troops

KABUL by US troops at the Bagram Airbase in central Parwan province, blocked the Kabul-Jalalabad highway on Tuesday.

The protestors — carrying white flags and chanting slogans against Afghan and US governments, claimed the US soldiers had torched four copies of the Quran on Tuesday night.

In the Pul-i-Charkh area on the eastern outskirts of Kabul, the demonstrators closed the busy road at 8am. As a result, traffic came to a halt, with a large number of vehicles parked on both sides of the road.

Mohammad Nabi, 45, introducing himself as a worker on the military base, said: “Night shift colleagues informed us that US soldiers burnt four copies of the Qurans on the airfield.”

Two Afghan workers were shot dead when they tried to prevent the US soldiers from desecrating their holy book, Nabi claimed.

“Since foreign troops have once again desecrated our holy book, we demand their immediate withdrawal from the country,” said one of the protestors, Maulvi Aqil Khan. The incident should be investigated and criminals brought to justice, he added.

The angry protestors criticised the government’s failure to take action against US soldiers, who have burnt the copies of the Quran several times. They asked the government and Parliament to launch an investigation into the case.

Elsewhere, a similar protest was staged in front of the Bagram Airbase against the incident. The demonstrators set alight a checkpoint at the airport and called for prosecuting the soldiers behind the outrage.

Meanwhile, ISAF Commander Gen. John R. Allen ordered an investigation into the reported sacrilege. “When we learned of these actions, we immediately intervened and stopped them. The materials recovered will be properly handled by appropriate religious authorities.”

The top US general said in a statement: “We are thoroughly investigating the incident and we are taking steps to ensure this does not ever happen again. I assure you … I promise you … this was not intentional in any way.”

Gen. Allen offered his sincere apologies for any offence the act might have caused to the president, government and the people of Afghanistan.