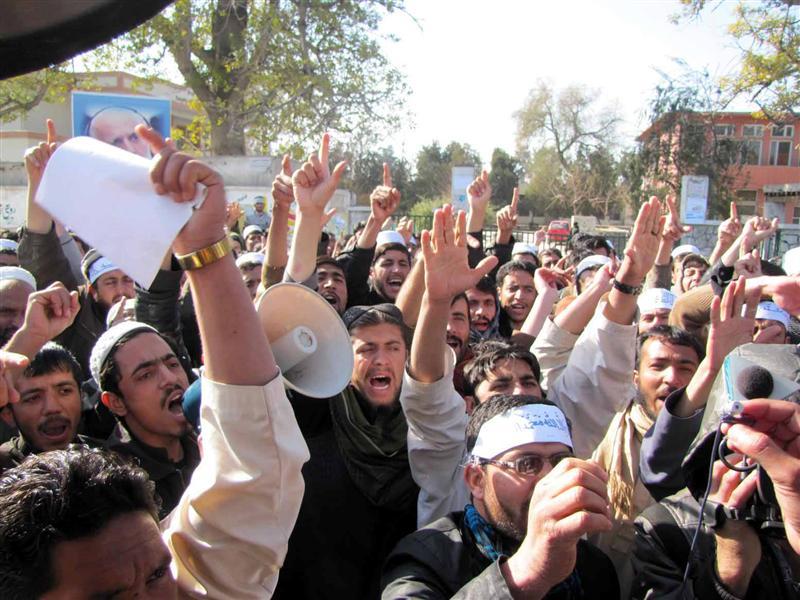 KABUL by US troops, officials and witnesses said on Thursday.

Two US soldiers and as many Afghan civilians were killed when a protest turned violent in eastern Nangarhar province on Thursday, officials said. Elsewhere, a civilian was shot dead and three others were wounded during a similar protest in neighbouring Laghman.

A day earlier, at least eight people were killed in a string of demonstrations across the country. The widespread protests continued for a third consecutive day against the torching of four copies of the holy book.

In the latest protests, furious residents clashed with US troops in the Khogyani district of Nangarhar and as a result two protestors and as many soldiers were killed, local official Ghulam-ud-Din Munib told Pajhwok Afghan News. The clash broke out after protestors were stopped from entering a US military base in the area.

But district chief Haji Muhammad Hassan said only one protester was killed and nine others, including two US soldiers, were injured in the incident.

Elsewhere in the province, two people, including a 12-year-old boy, were injured when Afghan forces fire into the air to disperse them in Batikot district.  Haji Zalmay, the district chief, said Afghan forces opened fire in retaliation for rock throwing by the protestors.  The Torkham-Jalalabad highway was reopened at 12pm after being closed for two hours.

The protestors in Laghman wanted to storm a base of Afghan soldiers, who fired into the air after the angry mob started pelting stones at them, said Ahmad Zia, a participant.

Public Health Director Dr Abdul Latif Qayumi confirmed two injured people had been brought to the Jalalabad Civil Hospital. However, he would not comment on their health condition.

In Dehrawud district of central Uruzgan province, officials said militants who penetrated the protest opened fired at police. Three protestors were killed and another 12 people, including five ANA soldiers and two policemen, were injured in the crossfire, said police spokesman Farid Ayal.

Meanwhile, one policeman was killed and four protestors were wounded during an anti-US protest in the Baghlan-i-Markazi district of northern Baghlan province. A dead body and four injured people, including two policemen, were brought to the district clinic, Director Dr. Qahir Qanit told Pajhwok Afghan News.

“People were marching from the old city to the new when police opened fire on them,” witness Ahmad alleged. In response, the demonstrators hurled stones at police and hit them with sticks, killing one policeman and injuring two others. The Kunduz-Baghlan highway remained blocked for quite some time.