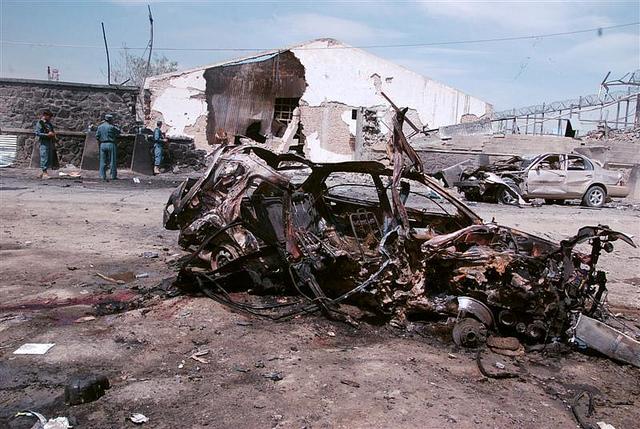 KABUL clad suicide attackers tried to enter an international military base at the 9th police district of Kabul.

The blast took place at 6:15 am when a suicide bomber crashed his explosives-laden vehicle at the gate of the Green Village, a military base of the International Security Assistance Force (ISAF) in Qabil Bai area on Khwaja Rawash road, Mohammad Daud Amini, the 101st Asmayee Police Zone, deputy commander told Pajhwok Afghan News.

He said five civilians, including a school student and a Nepali guard at the military base, were among those killed in the explosion. He added that 11other civilians and six Nepali guards were also injured in the blast.

However, the Ministry of Interior (MoI) in a statement said the attack carried out by militants using an explosives-laden car that tried to enter an international guesthouse of a British military camp, located at the 9th police district.

The ministry said seven people were killed and 17 others, including 10 school students were wounded in the morning blast.

According to Amini, four burqa-clad assailants tried to enter the

guesthouse in the camp’s vicinity, while one of the attackers blew up his vehicle.

Four other militants were gunned down by the security forces.

The operation ended after security personnel killed the last attacker at 10am, Amini said.

According to Pajhwok reporter at the scene, a vehicle workshop that belongs to the military camp was set on fire and smokes bellowed from the area,

Four passengers traveling in a Corolla car and a student walking along the road was killed in the attack, said the reporter.

He also said two vehicles were destroyed and a bicycle loaded with bread on its back carrier was seen at the roadside.

According to witnesses, three consecutive explosions happened in the area after suicide attackers entered the camp but officials only confirmed a single explosion.

However, a Pajhwok reporter at the scene said that there was another blast few minutes after Salangi briefed media regarding the incident.

An ISAF statement said a small group of insurgents carried out an attack on a private compound this morning in Kabul. The attack was unsuccessful in killing any ISAF personnel but once again resulted in Afghan civilian casualties that included a number of wounded children.

“Another attack by the insurgency that resulted in the deaths of innocent Afghan civilians, with most of that being children from a nearby school,” Jacobson added.

Afghan forces led a capable and quick response in containing and then killing all attackers, said the statement.

Taliban took responsibility for the strike, with their spokesman Zabihullah Mujahid, saying they carried out a car-bomb attack at the entrance of the ISAF camp to allow other fighters to enter the base.

He said after one of the suicide attackers blew himself up, paving way for other attackers to enter the camp and they were equipped with machine guns, rocket-propelled grenade (RPG), hand grenades and suicide vests.

Mujahid also claimed that militants have killed a number of Afghan and foreign soldiers.