A Kabul shoeshiner who wants to be a doctor 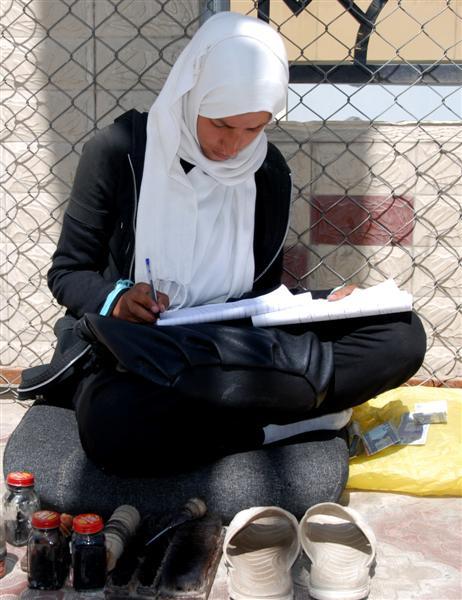 A Kabul shoeshiner who wants to be a doctor

KABUL): Getting to grips with poverty, Farzana is determined to eke out a living with dignity — working as a shoe-shiner in daytime before going to school. Despite the overwhelming odds she is faced with, the 15-year-old is determined to become a doctor.

The eighth-grade student at the Malalai Girls’ High School in Kabul, sitting under a worn-out umbrella, told Pajhwok Afghan News she had been doing assorted jobs over the past eight years to earn a livelihood for her family. Her father passed away when she was just 7.

She has to support a younger sister and a brother of schoolgoing age, as her mother cannot work due to high blood pressure and diabetes. For the past 4 years, Farzana she has been polishing people’s shoes in the Malik Asghar Square to support her family.

Earning about 200 afghanis ($4) a day, which is not enough to meet her family needs, the girl is working in difficult situations and braving weather vagaries in winter. However, she remains optimistic of coming out of these testing circumstance.

A resident of the Chehil Satun neighbourhood, she pays 2,000 afs in house rent but her home has no water. As a result, she fetches water from a nearby tape after returning home from school. Aditionally, the girl has to do other chores, like washing clothes and dishes.

“Everyone taunts me. Some passersby even say that I indulge in immoral activities and doubt the fact that I am a schoolgirl. Even when I show them my school card, the doubters respond that I’m telling a lie,” said Farzana, who hates being called a shoeshine girl.

Happy with the security personnel’s attitude, she says: “They take care of me, bring me meals and tea. When someone bothers me, they come and order them to go away, so much so that they beat up mischievous boys.”

For the sake of her mother, sister and brother, she tends to be tolerant of rude gestures from some elements. In an effort to get rid of this daily nuisance, the student-cum-worker is looking for a decent job.

She urged the government to provide work opportunity for the students who are supporting their families. Despite her financial woes, the girl won fourth position in her class. “I wish to be a doctor to serve my people,” she exclaime.

Over the past six months, the Afghan Red Crescent Society has been giving her family a 50-kilograms bag of flour, a five-kg tin of ghee, some sugar and tea worth 4,000 afs, as well as 5,000 afs in cash assistance, on a monthly basis.

The Ministry of Labour, Social Affairs, Martyrs and Disabled says there were 1.9 million child labourers across the country. Mohammad Ali Iftikhari, the ministryb spokesman, says they are working on a plan to help children.

After indentifying the deserving children, their parents would be paid every month, he added. After being included in vocational training programmes, they would be provided with employment opportunities, the spokesman concluded.