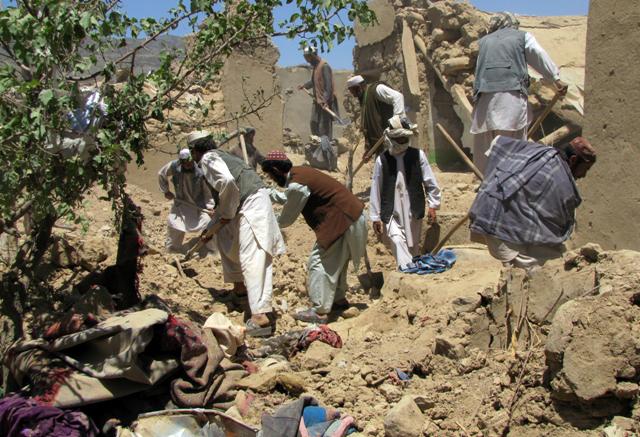 The air raid that caused the latest civilian casualties was conducted at 1:00 am in the Sajawand area on the periphery of Baraki Barak district, said the provincial deputy police chief.

Raees Khan Sadeq told Pajhwok Afghan News some insurgents who gathered at a residence opened fire on foreign soldiers. As a result, the soldiers retaliated with an airstrike that led to death of civilians and fighters.

He said a Taliban) strike.

He confirmed the death of 18 civilians, including seven children, five women and six men, besides acknowledging death of seven rebels.

He added the residences belonged to two area tribal elders — Bashir Akhundzada and Qayyum Akhundzada — who were also killed along with all their family members.

Dr. Abdul Wali Wakil, head of the provincial council, confirmed the incident, saying Akhundzada was among 16 civilians killed in the ISAF raid.

He added the locals protested in front of the governor’s office in Pul-i-Alam, carrying the dead bodies to prove the victims were ordinary residents and not insurgents.

The Taliban denied their commander was hiding in the tribal elder’s residence. Their spokesman, Zabihullah Mujahid, said all the victims were civilians.

At the same time, residents demonstrated in Logar’s capital to condemn the killings, but security personnel opened fire at them, injuring one protestor.

Habib Rahman, one of the area residents, said Bashir was arranging a wedding party for his son, to be held in the next three days, and had invited some of his relatives to his house.

Meanwhile, ISAF media office in Kabul denied the civilians fatalities, saying they conducted the operation jointly with Afghan forces to nab an insurgent commander in the area.

During the operation, the insurgents attacked the security force, which returned fire and requested a precision airstrike, said a statement from the multinational force.

It added during a follow-on assessment, security forces discovered two women with non-life-threatening injuries. However, it did not mention civilian deaths in the attack.