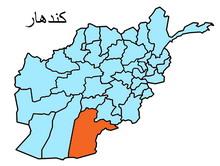 KANDAHAR CITY (PAN): The number of AIDS patients has doubled in southern Kandahar province, an official said on Sunday.

Kandahar Public Health director Dr Abdul Qayum Pakhla said AIDS cases were on the rise in Kandahar — cases has doubled from 11 in 2011 to 22 this year.

Doctors, tribal elders and the public participated in an awareness campaign organised by the Kandahar Public Health Department on Sunday.

Pakhla also mentioned that three decades of war, financial problems and drug usage were the major reasons for the rise in AIDS. He said to prevent the disease people should examine their blood to detect HIV.

Kandahar AIDS Prevention department head Dr Hamayoun Rehman said 1,320 blood samples were examined and 21 were positive. Among the 21 patients, 18 were males and three were females who contracted the deadly virus from their husbands.

He said four people had reached a critical stage while three had died. The main source of the disease was the use of syringes used by drug addicts.

AIDS awareness centres had been established in Kandahar but due to traditional beliefs and social stigma people are shying away from seeking treatment. The first AIDS patient in Afghanistan was detected in Kunduz in 2005.

According to the United Nations, 34 million people are suffering from HIV worldwide and half were women.