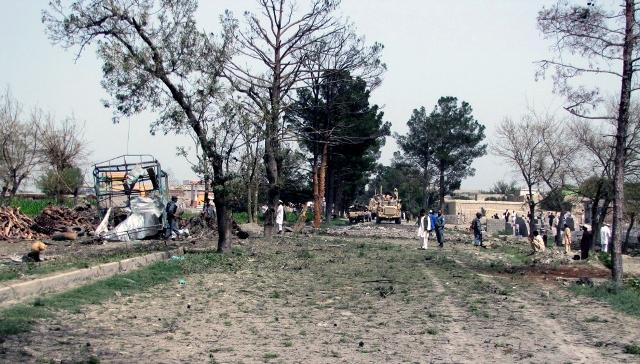 KHOST CITY (PAN): A suicide bomber on Wednesday detonated his explosives-laden vehicle at the entrance to the US Central Intelligence Agency (CIA) office in southeastern Khost province, killing three civilians and injuring several others, officials said.

The incident occurred at around 7:30am when the bomber detonated his van in front of the high-security base on the outskirts of the provincial capital, where the CIA centre is located, resident Habibullah told Pajhwok Afghan News.

Many workers were entering the base when the car exploded, inflicting casualties on several people, he said, without giving casualty figures. There was smoke and chaos all around, he added.

Col. Mohammad Yaqub, the deputy police chief of Khost, confirmed the blast, saying foreign troops had cordoned off the scene. However, another security official said on condition of anonymity three civilians had been killed and several others wounded.

In response to an emailed query from Pajhwok Afghan News, the International Security Assistance Force (ISAF) confirmed that insurgents detonated a vehicle-borne improvised explosive device (IED) near the “FOB CHAPMAN”.

“Initial reporting indicates there were some civilians wounded in the attack, but we won’t be able to confirm that until ISAF officials have conducted a full assessment of the situation,” the NATO-led force said.

A Taliban spokesman, Zabihullah Mujahid, asserted responsibility for the suicide attack, saying dozens of Afghan and foreign soldiers had suffered casualties in the bombing that targeted the CIA centre.

In a 2009 suicide attack on the same US base near the Afghanistan border, seven CIA employees and a Jordanian intelligence officer were killed. An Al Qaeda-linked Jordanian had been blamed for the deadly assault.