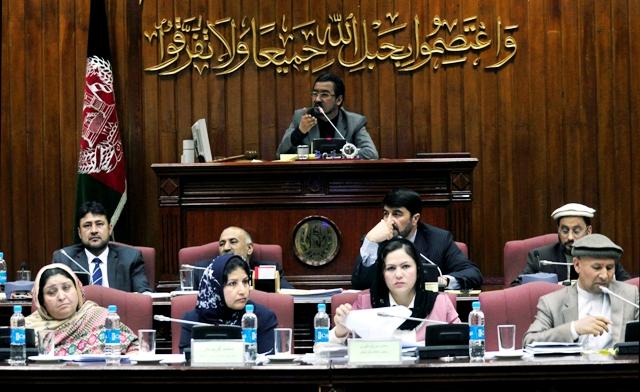 The draft law, having four chapters and 44 articles, was prepared under presidential decree of 2009 before being sent to the lower house for approval.

The proposed measure was debated on Saturday, but lawmakers could not take any decision on its fate because of sharp differences among them.

Some of its articles are in conflict with Islamic injunctions, according to MP Mullah Tarakhel Mohammadi, who suggested the 18 house panels should discuss the draft thoroughly to remove the flaws in it.

It could be placed before the Wolesi Jirga if the draft contained nothing against Islam, the legislator remarked. “MPs should carefully decide on the law to save their face in this world and in the hereafter.”

His colleague, Qazi Nazeer Ahmad Hanafi, feared the law — if approved in the present form — could create domestic problems besides damaging the fabric of Afghan society.

“If women’s shelters, as propped by the law, are approved by the Wolesi Jirga, we would be in for a revolution, such as the April 27 revolution that killed millions of people,” he warned, saying eight articles were against Islam and they must be corrected.

Yet another public representative, Abdul Sattar Khawasi, said: “I am shocked why the president has approved such a law that is against Sharia.”

But MP Ghulam Sarwar Faiz insisted the measure was very much according to the constitution and other laws of the country. Opposition from the members was largely driven by personal and political reasons, he maintained.

Over the past two years, 18 commissions of the house have been discussing the draft law and they brought proper changes to it, female parliamentarian Fawzai Kofi said. She urged approval of the draft law to protect women.