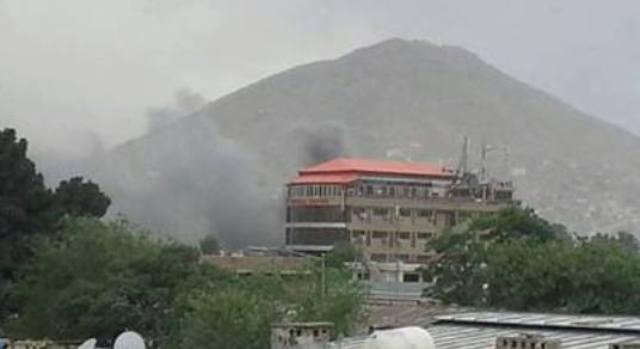 KABUL onslaught, targeting the UN mission office and police in the heart of heavily fortified Kabul.

He said there were five attackers laced with suicide vests, hand-grenades and guns. All were killed during clashes with security forces, he said, adding the attack lasted seven hours.

Kabul police spokesman Hashmatullah Stanikzai said a policeman and a Nepalese guard with a private security firm were killed and 13 others, including policemen, foreigners and civilians, were injured in the assault.

Earlier, the Ministry of Interior said two gunmen who were firing and throwing grenades from a building were killed close to the International Organization for Migration.

At the start, a huge car suicide blast, followed by a number of smaller explosions, took place near a hospital run by the National Directorate of Security or NDS, the intelligence service.

Police said there were six or seven attackers exchanging fire with security forces. Some attackers entered buildings and were fighting back.

A seriously injured Italian woman, some injured Nepalese and Afghan police officers were taken to the Emergency-run hospital,  the Italian interior ministry said.

The first explosion was so powerful that it was heard at least two miles away. At least four attackers were seen running toward the UN compound.

Taliban spokesman Zabiullah Mujahid said the main target was a guesthouse where CIA officials were giving training to NDS agents. He said the fighters were laced with heavy and light weapons and were firing on several targets from a building.

Mujahid said the initial blast was a suicide car bomb, which blew down the facility’s outer wall, allowing other attackers to storm inside.“We believe there are massive casualties inflicted on the CIA,” he said.