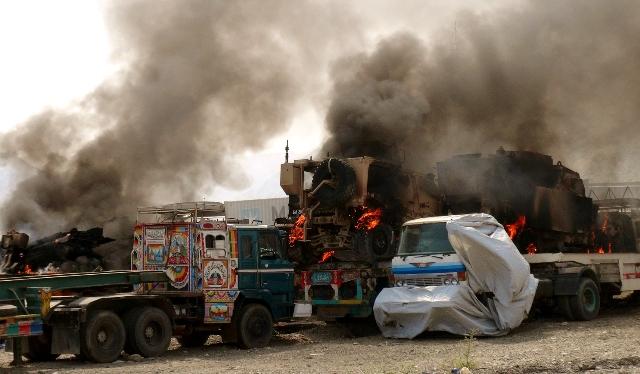 JALALABAD (PAN): The fighting at a joint base of Afghan and NATO forces in eastern Nangarhar province ended after several hours with the killing of three suicide bombers on Monday, officials said.

A group of suicide bombers stormed the US-Afghan border police military centre in the border town of Torkham at about 6am, border police officer Col. Hussainkhel, told Pajhwok Afghan News.

Bomb explosions jolted the parking lot of NATO-led forces, touching off a gunbattle, he said, adding three assailants in border police uniforms fired at the base. A number of vehicles were set alight.

Ahmad Zia Abdulzai, the governor’s spokesman, also said the attackers had been killed. Their bodies are still lying at the scene. He confirmed some fuel tankers were on fire.

Meanwhile, ISAF said it was an attempted but unsuccessful coordinated attack by enemy forces. Three enemies were killed, it added. “We can confirm that no ISAF personnel were killed as a result of this incident.”

A resident said he heard at least one loud blast before the exchange of gunfire erupted in the area. He added the busy highway was closed, as International Security Assistance Force helicopters were flying over the base.

Giving a witness account, shopkeeper Shafiqullah said ISA aircraft dropped bombs on the assailants just before 9am. He added flames were rising at the site and a number of oil tankers had been torched.

A Taliban spokesman, Zabihullah Mujahid, said several vehicles in the parking lot had been destroyed in the attack that caused casualties to tens of soldiers. However, he gave no specific figures.