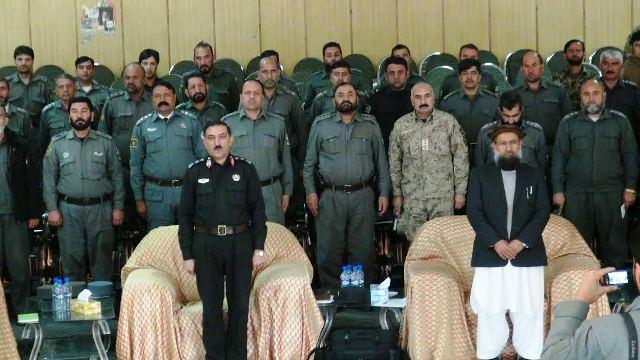 Tribal elders, government and security officials from the six districts were present at the gathering. The governor said they had asked the Ministry of Interior to deploy ALP to the troubled towns ahead of the April elections.

Ludin claimed the security situation in Nangarhar had improved compared to the past, but the enemy forces were out to create chaos during the presidential and provincial council elections.

He hoped the ALP deployment would enable residents of the six towns to go to polling stations and cast their votes in a peaceful environment.

The governor called on the ALP forces to respect people’s religious, cultural and customary views and practices, as doing so would increase the public trust in the government.

He also urged tribal elders to cooperate with the provincial police headquarters in the management of ALP forces.

ALP chief at the Ministry of Interior, Gen. Ali Shah Ahmadzai, said the duty and aim of the local law enforcement agency was to defend the country’s soil and its inhabitants.

He said in addition to providing security, ALP forces had been assisting locals during natural disasters in remote parts.

He said the age of ALP members should be between 18 and 45 years and they should be known for their good character and no role in war crimes.

The general said the local police received a month-long training before their deployment.

Nangarhar police chief Brig. Gen. Fazl Ahmad Sherzad thanked the Ministry of Interior for considering their demand and deploying the ALP personnel in the six districts, hoping the move would help improve security there.

Provincial council member Amir Mohammad said residents of the six districts were happy with the deployment and were ready to cooperate with the forces.

The ALP forces have already been raised and deployed in the Khogyani and Goshta districts.