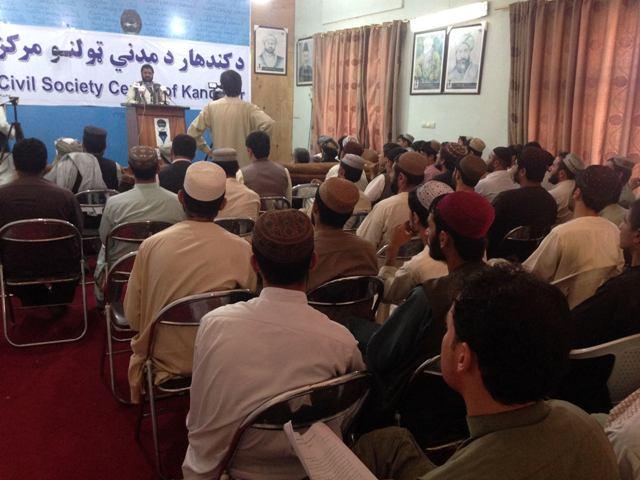 KANDAHAR CITY (Pajhwok): Expressing their concern over the current deadlock, civil society representatives in southern Kandahar province on Thursday stressed the need for credibility of the presidential election.

Addressing a meeting at the Kandahar Press Club, they vehemently denounced the ripping of President Hamid Karzai’s portrait by supporters of Dr. Abdullah and suggestions of a parallel government.

One of the civil society activists, Ahmad Shah Spur, said people exercised their voting right for the sake of a legitimate, democratic and responsible government. The public will must be respected, he added.

The latest presidential vote, appreciated domestically and internationally, was demonstrative of democracy striking root in the country, he observed, calling the election a major achievement for the Afghans.

But the post-election wrangle and allegations fuelled concerns among the masses, Spur said, lashing out at Abdullah’s apologists for disrespecting the presidential portrait and resorting to vandalism.

Writer and researcher Najibullah Hotaki said decisions of the electoral bodies should be respected. Steps that could fuel linguistic and regional tensions must be avoided, he said, adding the masses would never ever accept a government formed on the basis of coercion.

Eng. Kabir Darwish urged both presidential runners to wait patiently for the final election results. People have very simple demand: restore the prestige of the ballot and election, he remarked.

The Afghans should present a better image of their country to the world by accepting the election results in a descent manner, he added.

At the end of the gathering, a resolution was adopted, asking the Independent Electoral Complaints Commission (IECC) to separate fraudulent votes from genuine ones. The resolution called upon the contenders to accept the final results to pave the way for a smooth power transfer.

The resolution asked both candidates not to harm national integrity. It regretted the tearing of Karzai’s portrait by the supporters of Abdullah.

“An elected president is a symbol of national unity and insulting him amounts to slighting the whole nation,” it said. The meeting asked security officials to hold the culprits accountable.