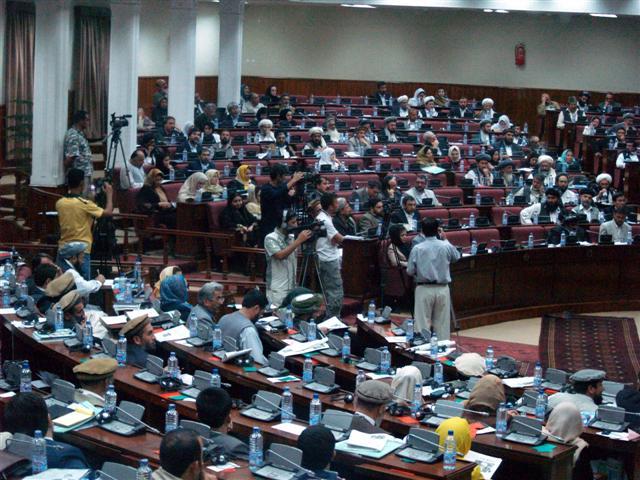 The claim comes a day after security officials in Ghazni said the Taliban insurgents beheaded 15 civilians and set on fire hundreds of homes in Ajristan district, a claim the Taliban reject as untrue.

Wolesi Jirga member from Ghazni Mohammad Ali Akhlaqi told the house that Ghazni was among the country’s insecure provinces, but security organs had not been paying it due attention.

The lawmaker said thousands of local and foreign militants yesterday attacked the Ajristan district, killing a large number of people.

“Yesterday, the Ajristan district was about to fall, but Afghan security forces rescued it after hectic efforts,” said Akhlaqi, who claimed the attackers included Pakistanis, Chechens and ISIS fighters.

“Some of the attackers had their faces hidden and were holding black flags in their hands instead of green. It is known that ISIS’s flag is black,” he argued.

The colour of Hezb-i-Islami (HIA), the second largest insurgent group after the Taliban, is green and that of Taliban’s is white.

Nafisa Azimi, another MP from Ghazni, said the ISIS had launched its activities in some Ghazni districts some time ago.

“Besides Ajristan and Andar, the ISIS has been active in other districts as well. These fighters have been spotted by local residents with black flags in their hands and with their faces hidden,” she said.

She said the negligence by security organs enabled the ISIS to launch its activities in Ghazni and openly operate in some districts. She warned if the ISIS threat was not countered in Ghazni, it would spread to other provinces.

Another public representative from Ghazni, Chaman Shah Itimadi, said they had time and again approached the security officials concerned over the growing insecurity in Ghazni, particularly in Ajristan, but no considerable step had been taken in this regard.

First deputy speaker Sadiq Ahmad Osmani, who presided over the session, said that insecurity had lately increased in several provinces, including Ghazni.

He said 21 insurgents and 15 civilians had been killed and more than a dozen insurgents injured. A number of civilians were missing after yesterday’s violence in the district, he said. The official said additional security forces had reached Ajristan and the town would be cleared soon.