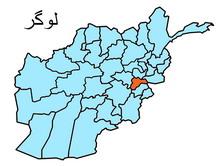 KABUL (Pajhwok): An uprising leader on Monday said he survived a gun attack in the provincial capital of central Logar province.

Farhad Akbari told Pajhwok Afghan News he was travelling in his armored vehicle this evening when a gunman on foot opened fire at him with an AK-47 assault rifle in the Shahidan Square area of Pul-i-Alam.

He said the attacker was able to flee because police did not reach the scene in-time.

Din Mohammad Darwesh, the provincial government spokesman, confirmed the incident and said the attacker had fled, but police were searching for him.

Akbari has been spearheading a revolt against the Taliban over the past three years and has 200 armed men in his group. It was the fifth attempt on his life. He has previously survived bomb and gun attacks, but lost three family members to the incidents.