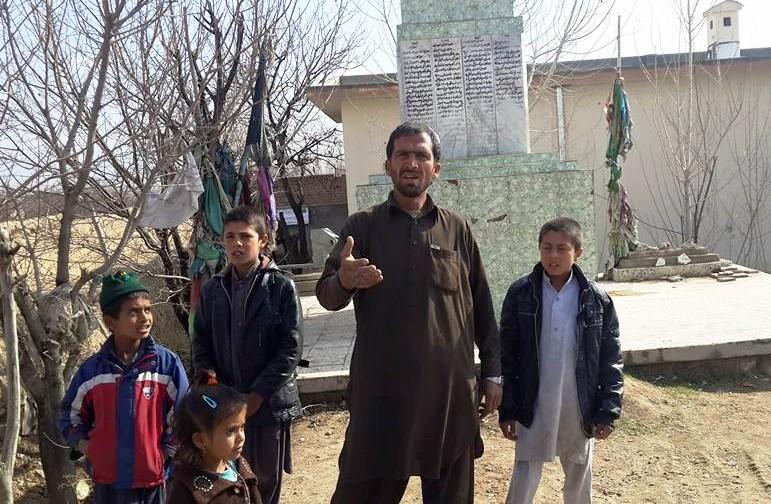 PUL-I-ALAM (Pajhwok): Having lost three of his family members to a suicide bombing seven years back, an anguished resident of central Logar province pans the government and other organisations for failing to give him any recompense.

At least 40 people, including students and teachers, were killed in the massive explosion in the Shikhak village of Mohammad Agha district in 2009. Like other families, 22-year-old Rahim Dad also had three of his relatives mown down. A fourth was wounded.

In an exclusive interview with Pajhwok Afghan News, the young man agonsingly recalls: “It was about 7:00am. On my way home, I heard a powerful explosion. In a state of profound shock, I fell into a local stream.”

Who was the target of the vehicle-borne bomber is yet to be known, but innocent civilians bore the brunt of the widely-denounced attack. “After a while, I managed to hold my nerve and reached the site, strewn with body parts and blood.”

Around 40 people — most of them teachers and students — were martyred in the explosion. Rescuers were able to find the bodies of only 15 individuals, who could be recognised.

“Charred body parts were spread all around. We found someone’s head and limbs of others. Hours later, we dag up 40 graves and interred mutilated corpses — or parts thereof — in each tomb to satisfy the victims’ kin,” he says.

Rahim Dad’s brother was left suffering from anacusis by the big bang. To this day, Dad remains scared of explosions — even mention of them. Relatives eschew discussing with him blasts a common occurrence in this blighted land.

His young brother and two cousins killed and another brother wounded in the the assault, which inflicted heavy losses on several people. Shops, and houses in the neighbourhood were damaged and livestock killed.

Ever since the tragedy, Rahim Dad has been shouldering the burden of looking after six orphaned children and three widows of two cousins and a brother. He says his old father cannot share his responsibility and he has to go it alone.

One woman from the village, who was left grieving the loss of two sons in the terrorist act, has died of cancer. Dad laments that seven years on, the government has not bothered assessing economic woes of the victim families.

The man adds former president Hamid Karzai paid each martyr’s family 100,000 afghanis in compensation soon after the incident. But the hapless households spent those amounts within three days of their receipts on condolence ceremonies.

Rahim Dad wants the national unity government, led by President Ashraf Ghani who also hails from Logar province, to provide jobs for the affected people and ensure security of the area.

Mohammad Yunus, 11, standing near his father’s grave in the cemetery, says: “He embraced martyrdom in the bombing seven years ago.” One of the boy’s cousin was also among the dead.

“I was only four years old when my father died. By this quirk of fate, I being the elder son have to take care of family affairs. I have to go to school as well.” To boot, he has to tend to a milk-giving cow. To eke out a living, the minor sells yogurt in the village bazaar.

The district police chief, 1st Lt. Matiullah Abdul Rahimzai, confirms no one has been detained so far in connection with the bombing. At least 30 families have lost their near and dear ones to the attack. In remembrance of the victims, the area has been renamed as Shaheedan (martyrs) village.