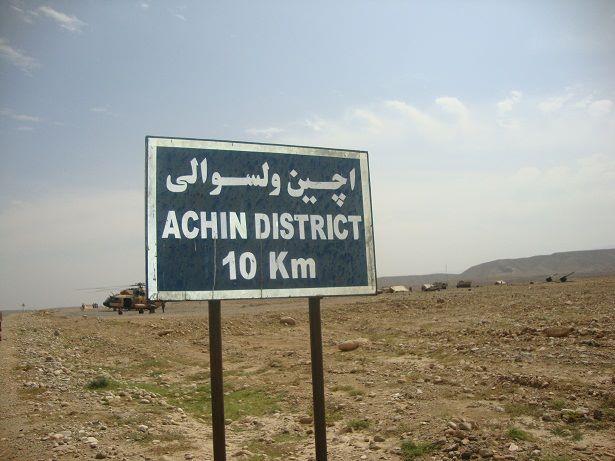 JALALABAD (Pajhwok): The Islamic State (IS) — or so called Daesh — has chosen the Achin district of eastern Nangarhar province as its headquarters for a variety of reasons.

The district’s proximity to the Durand Line, a contested borderline haunted by militants of all stripes, and easy weapons and logistical supply routes seem to have driven the rebel group’s choice of its HQ..

Achin has an area of 350 square kilometers and a population of 150,000 –all of them Pashtuns from Shinwari and Alisher Khel tribes. Majority of residents of the district are reliant on agricultural, cultivating wheat, maize, potatoes, cotton, onion and others crops.

Where Daesh fighters came from

A source close to the group confided to Pajhwok Afghan News that five years ago when Pakistani forces launched operations in Orakzai and Khyber agencies, families of Daesh fighters started sneaking into Achin. Most of them were Pakistani militants.

The rebels then built seminaries and cultivated local residents, as well as the Taliban, the source said, adding the predominantly Salafi fighter gradually joined forces with Daesh. The move caused differences within the Taliban groups.

Salafis from Kunar, Nuristan, Nangarhar and a number other provinces joined Daesh in Achin and converted the district into their stronghold. Daesh wanted to extend sweep to the north through Sarobi and Tagab districts, but its plans had been foiled by Afghan and foreign forces, the source revealed.

Despite losing many dreaded commanders and leaders, Daesh still has several training centres in Achin. Nangarhar police spokesman, Col. Hazrat Hussain Mashraqiwal said: “Daesh has chosen Achin as its base where the rebels could easily receive supplies from across the Durand Line.”

Achin district chief, Haji Ghalib Mujahid, confirmed more than a thousand families had arrived the district from across the border and most of them gradually joined the IS insurgents.

Daesh planned to capture Achin and convert it to a launching area for attacks on other parts of the country, but its plan has been frustrated and its hideouts changed into its graveyard by Afghan forces.

Pounded by Afghan forces, hundreds of Daesh families have fled back to areas across the Durand Line, Mujahid claimed, saying the group had been weakened significantly by the recent offensives.

A tribal elder from Achin, Shal Bacha Shinwari, said that Daesh had settled in the district in order to receive supplies from across the border without any problem. Another motive was that Pakistan had plan to destabilise Achin and pave the ground for its occupation.

He said despite the fact that tribes in Goshta and other border towns stood united, Pakistan occupied some area of the district. However, Pakistan could not do so in the Shinwari district, therefore it tried to disrupt security of the area, he maintained.

Local officials say Daesh fighters, for the first time after their arrival in Achin, massacred 12 people including elders in a bomb attack and hanged and shot a number of other people in Kot, Nazyan and Haska Mina districts in a show of strength.

Experts and officials say Achin district, lying close to the Durand Line and having forests and mountains, is an ideal sanctuary for militants. Afghan forces conduct operations in nearby areas and districts and attack rebels in Momand, Pikha and Shadal areas.

The areas are under the control of Daesh, but Afghan forces and uprising groups have recently established security posts there and curtailed rebel activity to a large extent, commentators claim.

Daesh guerrillas attracted global attention when they launched their violent activities in Achin for the first time in April, 2015. Martyring tribal elders, beheading people on the charge of having links with the Taliban and capturing hundreds of individuals, Daesh hogged the headlines last year.

Javid Ghafoor, a political expert from Nangarhar province, said Pakistani and Afghan Taliban joined the IS in Achin. He added Daesh easily converted the district into its base.

Exploiting provincial leadership’s weaknesses and ideological links with residents of Nangarhar, Daesh has been able to gain strength, he remarked, admitting the group had captured areas of Shinwari and other districts in addition to having control on 18 villages of Achin.

Shah Mahmod Shinwari, a resident of Shinwari district and a reporter with Azadi Radio, told Pajhwok Afghan News: “Daesh  has been able to expand its presence in Shinwari zone, using tribal differences as an opportunity and receiving equipment from across the border.”

The National Directorate of Security (NDS) chief for Nangarhar, Gen. Dad Mohammad Harifi, said: “Daesh wanted to capture Achin and then launch attacks on Jalalabad, but failed.” Thousands of people from Afridi and Orakzai tribes sneaked from Waziristan tribal region into Achin, but they were unable to take control of the district.

In May 2015, Daesh captured 18 villages including Deh Sarak, PikhiNargusa, Shadal Bazar and Maidanak during its first operation in Achin. Mohammad Nasim Sangin, commander of the 201st Selab Military Corps, said the villages were retaken from the militants in February 2016.

Around a thousand uprising members have been deployed to the recaptured areas, where the influence of Daesh had diminished, he said, hoping the outfit would be eliminated soon.

Military expert Mohammad Anwar Sultani said the main cause of Daesh’s emergence in Nangarhar was tribal differences. “Three years ago, people from two Sapi and Ali Sherkhel tribes engaged in a land dispute. Each side tried to vanquish the other. Some tribal elders joined hands with Daesh to attack their rivals.”

He opined Daesh fighters were still active in parts of Achin district and needed decisive operations to be fully eliminated. The goal can be realised through a sustained security offensive.

Clashes among between Daesh, Taliban and Afghan forces are still on, but local officials believe they have decreased in intensity and frequency. Nangarhar police chief, Maj. Gen. Fazal Ahmad Sherzad, said undreds of Daesh fighters had been killed and wounded in Shinwari districts.

On the other hand, Achin district head, Haji Ghalib Mujahid, said 570 Daesh fighters had been killed and hundreds of others wounded in air and ground operations. He acknowledged 60 civilians were also killed and 50 others injured.

Mujahid said that a number of Afghan security personnel were killed or wounded during the clashes. However, he did not provide exact figures.

Wali Khan, a resident of Achin, said Afghan forces had suffered casualties during clashes with Daesh rebels. “Dozens of security personnel including a border battalion commander have been killed, some of them were beheaded and others came under attack at their posts.”.

So far 20,000 of the displaced households have received aid and the process of assistance continues. The director added some of the families had returned to their homes.

After a year of fierce fighting, the situation in Achin has become somewhat better. Haji Ghalib Mujahid, the district’s administrative chief, said Momand and Shadali Bazar areas were still under the influence of Daesh, while other localities were being controlled by Afghan forces.

“We have set up more security posts in the district and aerial surveillance has been escalated by Afghan and foreign forces. The operations, particularly drone attacks, have left the rebels in a precarious position,” he claimed.

Provincial police spokesman Col. Hazrat Hussain Mashraqiwal insisted that recent counter-terrorism operations in Achin district had been a success, leading to improved security in the area.