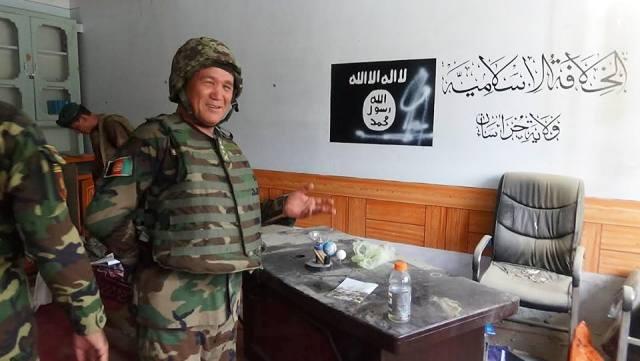 JALALABAD (Pajhwok): A large Islamic State or Daesh centre has been captured by Afghan commando forces during an operation in the Kot district of eastern Nangarhar province.

The Daesh affiliates would manage their activities from the centre in Sarai Bazaar area and would put on trial their opponents.

The centre has been captured by commando forces during their operation and now leftover documents and other items could been at the facility.

Several Daesh black flags had been hoisted on the centre and walls of some nearby shops and “Khilafat-i-Islamia Wilayat-i-Khorasan” (Islamic State of Khorasan province) was written in black colour on the walls of some rooms.

“It was a marshal place of Daesh militants, they would organize attacks from here and besides a court, they have had established some other departments,” he said.

The operation by the Afghan commando forces is not confined to the Sarai Bazaar area alone. Away from the area, there are two frontline areas called Faqir Baba and Ilyas Baba localities.

All residents of these villages have been displaced. Several homes have been torched as a result of clashes between the warring sides. Bullet holes in walls of homes are visible.

First battalion commander of the Special Operations, Col. Ghulam Hazrat, told Pajhwok Afghan News that the Daesh militants were hiding in people’s homes from where they engaged security forces.

“Our the past few days, we cleared areas from Janjal Ghundi to Ilyas Baba and now this area is being cleared of Daesh,” he said.

Ilyas Baba area links the Kot district with Haska Mena district. It is feared armed militants fleeing the operation might sneak into other districts and stage a comeback after the operation is ended.

“After we capture an area, our second team comes and clear that area and then other security forces establish posts,” he said.

A resident of Syed Ahmadkhel area in Kot district, which was recently cleared, Kabar Khan said there was now security in their area after the commando operation and some families had returned to their homes.

He said several homes were damaged and household animals perished during the operation.

Another resident, Mohammad Karim, said: “The government should start providing assistance to local residents because they incurred huge losses during the conflict.”

About a month ago, hundreds of Daesh militants attacked residential homes in various areas and captured and plundered them, killing some civilians as well.

Sometime ago, an operation codenamed “Shaheen 18” was launched against Daesh, but later President Ashraf Ghani ordered commando operation to have better results.

The commando forces are advancing and they have air support from the Afghan Air Force and NATO forces, but Daesh militants are keeping alive the conflict in remote pockets.

The Afghan Commando Forces commander general at the Ministry of Defence had said the operation in Kot and nearby districts against Daesh was a success and would continue.

The group has so far said nothing to the media in this regard.