KABUL front, contracts for several projects worth millions of dollars have been awarded to a Lebanese firm in an opaque and obscure manner.

Pajhwok Afghan News conducted detailed investigations to ascertain how the Khatib and Alami Consulting Engineers SAL Offshore– a company headquartered in Beirut — managed to win more than $16 million contracts for seven projects in the past two years.

How did the firm make it to Kabul?

The Beirut-based company, registered with Afghan government institutions under different names, was founded by Mounir El-Khatib in 1957. Then it was called Consolidated Engineering Company.

Five-year later, it was merged with Zahir Alami and renamed as Khatib & Alami. But accurate information about the firm’s arrival and operations in Afghanistan is not available.

Evidence gathered by Pajhwok shows Khatib and Alami Consulting Engineers
SAL Offshore submitted documents for doing projects in Afghanistan to the Afghanistan Embassy in Uman, the capital of Jordan the immediate neighbour of Lebanon, last year.

Based on a letter from the Afghanistan Embassy in Jordon, the Ministry of Foreign Affairs in Kabul introduced the company to the Ministry Commerce and Industries on February 20, 20017 for operations in the country.

According to the letter, the company was introduced by Ramazan Arab through an authorised representative having the required documents. Arab requested the opening of a branch of the firm in Afghanistan.

On February 28, 2017, the Afghanistan Investment Support Agency (AISA) granted the company a work permit Khatib and Alami Consulting Engineers Sal Offshore Consulting Engineers mentioned as a Jordanian firm in a formal letter from MoFA.  A similar change in the firm’s appellation has been seen in documents of different government organisations.

Egged on by Rula Ghani’s brother

“Professor Riad Saada and I persuaded the firm to come to Afghanistan and I’m proud of it devising design strategies here. They are enthusiastic about working in Afghanistan,” he remarked.

fghan students during his studies at the American University of Beirut. They have been friends since the university days.

The deputy minister explained the first lady’s brother, having no ties to the firm, enjoyed relations with its management. The relationship is based on their being Lebanese citizens.

Contracts before grant of licence 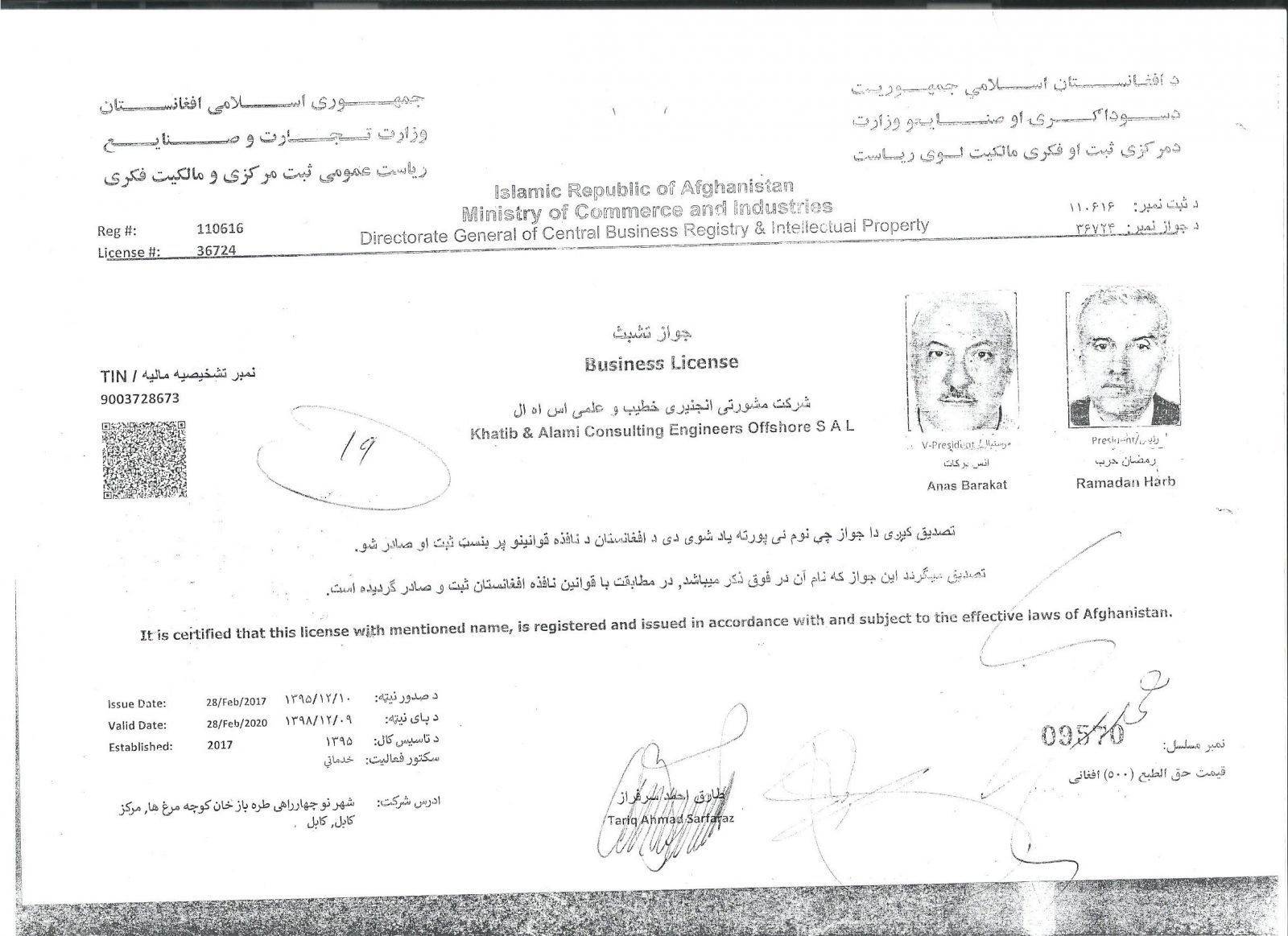 Information received by Pajhwok reveals the company was referred by the National Procurement Authority (NPA) to the Kabul Municipality on May 19, 2016. The letter said the Municipality could award it the Gardina Sakhi road project.

Though Ministry of Commerce and Industries (MCI) had not yet issued Khatib and Alami Consulting Engineers Sal Offshorea domestic work permit, yet the agency recommended the company to the municipality. “The municipality has the authority to from a direct source (Khatib & Alami.”

According to MoFA, the company received a work permit from MCI on March 13, 2016 — almost year after it had been awarded four projects without any justification. 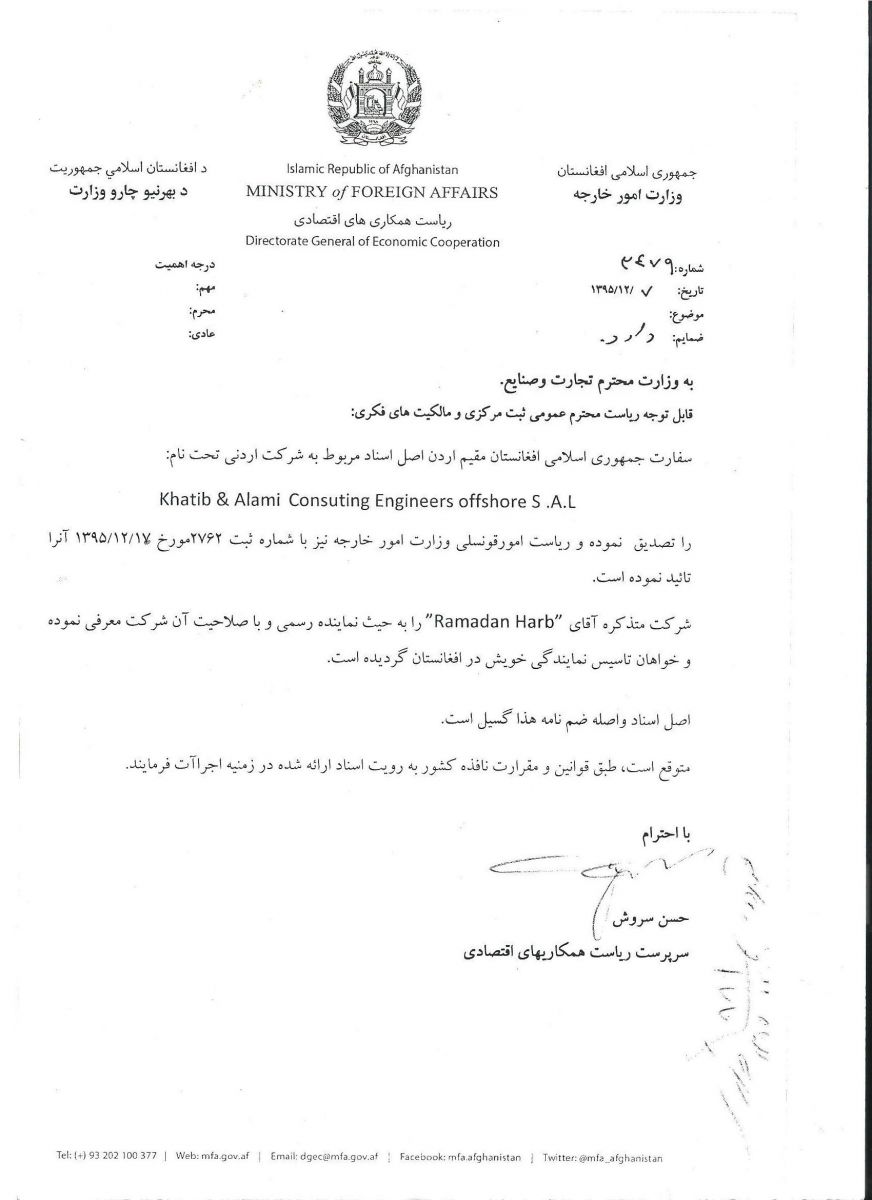 All projects awarded to the Khatib and Alami Consulting Engineers Sal OffshoreCompany by the Ministry of Urban Development (design of the administrative city in Kabul after the issue of licence) and four projects by the Kabul Municipality (before the grant of the permit) were single-source contracts.

Under the single-source system, a particular company is directly given a contract without bidding for construction work and supply of goods.

Conditions for award of contracts

Under Article 22, Chapter 3 of the Afghanistan Procurement Procedures, single-source contracts for projects are used in the following conditions:

Contracts above 100 million afghanis are signed by the National Procurement Authority. The NPA says contracts are announced for bedding to foreign companies as per their importance. Domestic firms also can compete with foreign companies at the same time.
The National Procurement Authority (NPA) said donor countries’ directions were also fateful in choosing foreign or domestic companies for awarding projects to them.

Finical and technical ability, work experience, financial guarantee and availability of list of professional workers, tax clearance documents and required equipments are standards of foreign and domestic companies that are important according to NPA.

The Ministry of Urban Development (MoUD) and Kabul municipality called the Khatib and Alami Consulting Engineers Sal Offshore ‘a credible foreign company’ that implemented different projects in different parts of the world.

A municipality official, who wished to go unnamed, said projects were awarded to the company through the National Procurement Commission, not through bidding process. 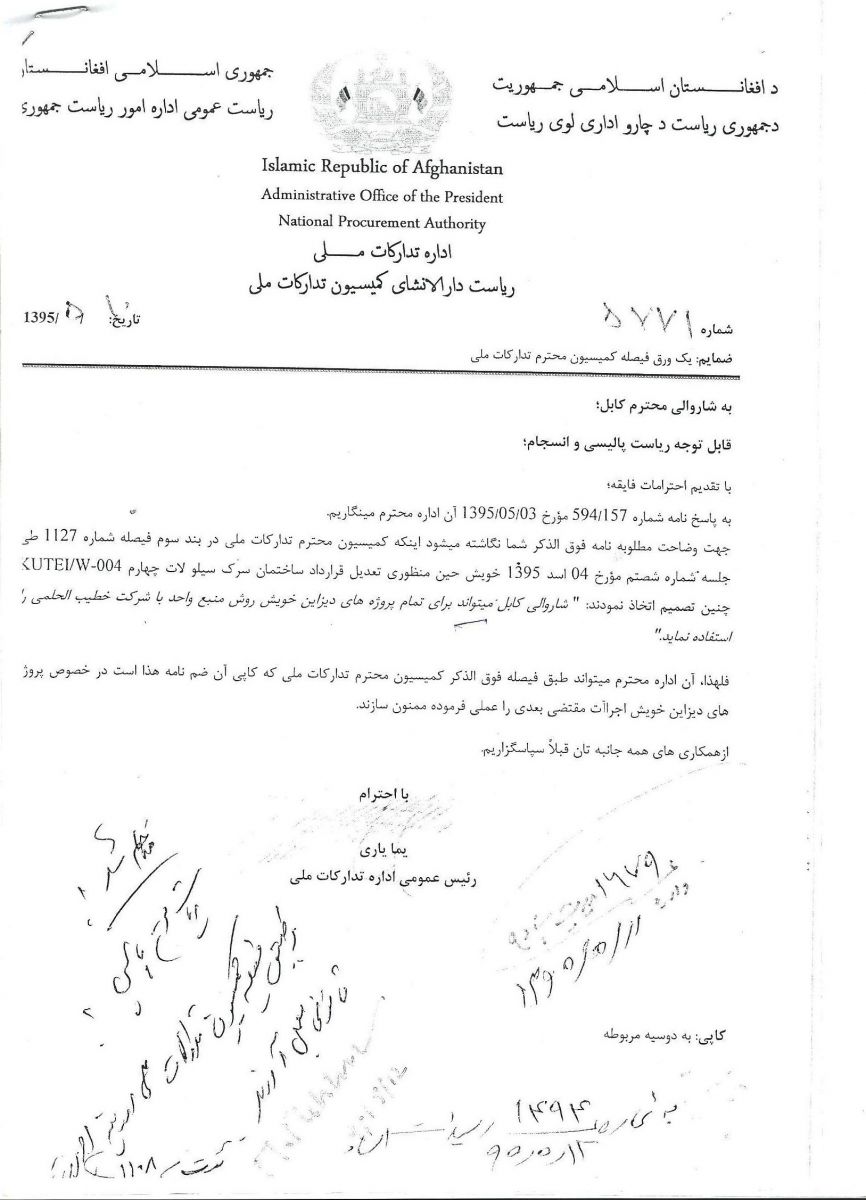 About awarding many projects to the Lebanese company, the Kabul municipality in a written form told Pajhwok: “The municipality under the President Ashraf Ghani directive has passed all the design contracts procedures with the company through single source method following a letter numbered 1127 on July 25, 2016.”

“We have contracted the projects based on NPC’s directions and procurement law,” the municipality said.

MoUD spokeswoman Nilofar Langar said government offices and the complex master plan in Darul Aman area of Kabul had also been given to the Khatib and Alami Consulting Engineers Sal Offshore based on single source method. She said the contract had no legal problem. 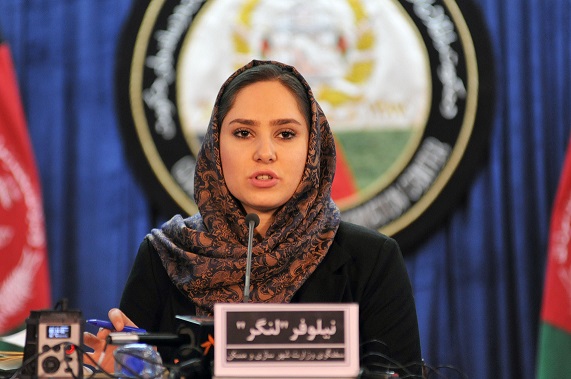 The contracts were signed with the company due to its good performance and experiences, Langar added. “This company has international credibility, particularly in Islamic countries, it has 30 years experience in building township complexes,” she said.

In response to a question why major projects were not announced for bidding, she said: “When a company meets specific conditions, we can offer our projects for bidding.”

She rejected any type of family relationship between the First Lady and the Lebanese company and said: “We signed the agreement with the owner of the company, we also have information about it and we know there is no relation between the president’s wife and the company.”

Despite the municipality and MoUD say the contracts with the Lebanese company were signed based on single source method, but the NPC, which operates under the president’s leadership, comes with an unclear response. 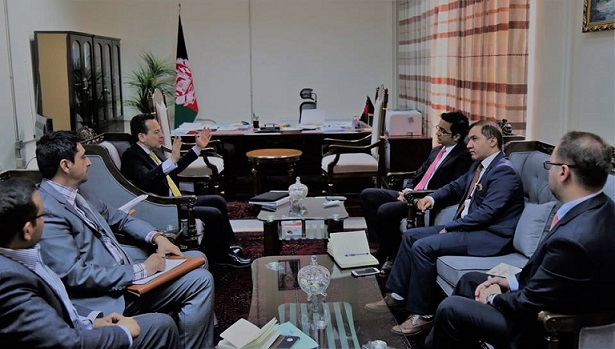 Sohail Kakar, strategic advisor at the NCP, about single source contract with Khatib and Alami Consulting Engineers Sal Offshore Company, said: “This was the decision of NPC, a commission that is chaired by the president,”

Kakar rejected municipality’s claims that the NPC had directed it to sing the contract with that specific company and said the commission had only supervision role and had no authority to tell an organ or ministry to sign contracts with specific methods and companies.

He did not reject probability of other factors in selection of the company for projects and said: “Khatib and Alami Consulting Engineers Sal Offshore Company is a strategic shareholder of the Afghan government.”

But Kakar said the NPC did not find any evidence and document to prove relationship between the company and any government officials or the first lady. The foreign company has all the requirements considered in Afghanistan laws for being selected for implementation of projects, he said.

“Rula Ghani has no brothers in Kabul, it is impossible that all Lebanese companies would have relations with the first lady,” he said.

Nasrullah Sadiqizada Nili, a lawmaker from Daikundi province, said: “Ghani does what he wants. Now he works for Rula Ghani, he awarded major projects to the company where Rula Ghani’s brother works.”

“We have enough standard construction companies inside the country, so signing such contracts with Lebanese company hams people’s trust in the government,” he said.

Awarding many projects to a foreign company without bidding process proved corruption in the Presidential Palace and violation of law, he said. He asked the parliament to seriously investigate the issue and do not let the process continue.

Abdul Latif Pedram, a lawmaker from Badakhshan province, said he believed the Lebanese company was chosen because it belonged to Rula Ghani’s brother. “One of the reasons the president relied on the NPC is to sign contracts with his relatives and friends,” he said.

Probability of awarding more projects to Khatib and Alami

An official of the municipality, who wished anonymity, said three more projects would be also awarded to Khatib and Alami Consulting Engineers Sal Offshore Company in near future.

Deputy public works minister, Ahmad Wali Shirzai, said the Khatib and Alami Consulting Engineers Sal Offshore Company had no office in Kabul but participated in the bidding of Kabul ring road design, Kabul-Logar second road design and plan, Salang Pass plan and design and Qaisar-Laman road plan and design. He said the Lebanese company had secured more scores and would be likely chosen for projects implementation.

Nabiullah Azimi, procurement head at MoUD, also said the reason Khatib and Alami was chosen was the company’s credibility and high standards.

“The projects are awarded to the company based on an agreement, the company checks the workers’ performance and guides the workers, but we cannot provide more information in this regard,” he said.

An official at MoUD, who wished to go unnamed, said: “ All contracts of the ministry have been shared on the ministry’s website, but the capacity building of workers contract that signed with Khatib and Alami Consulting Engineers Sal Offshore Company kept secret by the NPC,”

In July 23, Afghanistan Civil Aviation Authority (ACAA) in a statement said officials of the authority had discussed design and plan of Herat, Kandahar, Khost and Nimroz airports’ terminals with the Lebanese company. However, the statement did not provide further details about the talks.