MAHMOOD RAQI (Pajhwok): The machinery of Gulbahar Textile Plant in central Kapisa province has been sold, its land partially grabbed and the building is ruined.

Once a famous textile factory in Asia for its quality products, the state-owned plant is currently in a dilapidated condition and no attention has ever been paid by the government for the plant’s revival.

Najibullah, a former employee of the factory, recalled the factory was provided electricity from Sarobi Dam and its employees belonged to Kabul and lived there. The staff would be transported to the factory and brought back homes daily in special buses.

The factory’s construction had been demanded by former Afghan economist and founder of Da Afghanistan Bank (central bank) Abdul Majeed Zabuli during Prime Minister Shah Mahmood Khan’s tenure and equipment for the factory was imported from Germany.

“I worked in Gulbahar factory, thousands of metres of cloth was produced during the day, electricity to the factory was supplied from Sarobi Dam, some people worked in morning shift, some in the afternoon and others in the night,” he said.

Besides salaries, the government provided food and other assistances to the employees and those who worked in the factory were economically sound, remembered Nijibullah. 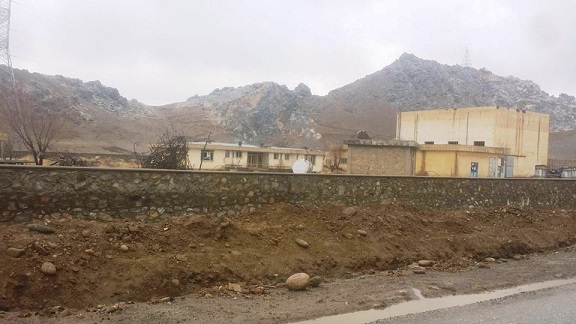 A resident of Mahmood Raqi, the provincial capital, Bashi Hazrat, a former employee of the factory, said Afghan and German engineers would work in Gulbahar factory.

Besides garment, the Gulbahar factory would manufacture blankets and its products were of high quality in Asia. The products of Gulbahar factory had market in Afghanistan, neighboring countries and Europe, he added.

According to Hazrat, as internal crisis started engulfing Afghanistan 40 years ago, operational activities of Gulbahar factory suffered and finally the plant ceased production.

Abdul Fateh Shafique, administrative chief of Kohistan Awal district, said the Gulbahar factory was a national asset and it earned $32 million revenue when it was operational. He said no attention had been paid to the factory’s revival in the past 17 years.

He said between 2006 and 2014, delegations from the finance, mines and economy ministries had visited the factory.

In addition, a German delegation also visited the factory to collect information and share it with their government.

Shafique urged reactivation of the factory as immense manpower was available in the province. He said the government seemed reluctant to revive the factory.

He said around 3,000 acres of land of the textile factory had been grabbed by powerful individuals and some portions had been sold and needed to be taken back and handed over to the factory.

Shafique said currently the factory had a few employees who collected rent from shops related to the factory. There was no other revenue generation source of the factory.

He said some machinery of the factory had been sold out by the concern ministry and the factory was of no use anymore.

Current in charge of the Gulbahar textile factory Enayatullah said efforts for revival of the factory were underway and the matter had been discussed in the Council of Ministers.

He told Pajhwok Afghan News the factory was not operational but still it has 75 employees who looked after the remaining machinery, shops and dealt with some administrative matters.

“Different variety of clothes and blankets were produced in this factory in the past. The products were exported to foreign countries besides meeting domestic demand,” Enayatullah recalled.

According to him, since the Taliban regime, 120 acres of the factory’s land has been grabbed and no action was taken after formal letters in this regard were dispatched to local authorities and officials in Kabul.

Hussain Snajni, the Provincial Council (PC) head, said he was long raising his voice for revival of the Gulbahar textile factory. He added hundreds educated youth in Kapisa were jobless and the factory’s revival could create jobs for them.

He said President Ghani during his trip to the province promised to revive the Gulbahar factory by the government or by the private sector.

Haji Hashmatullah Ishaqzada, head of Kapisa civil societies, said the revival of textile factory was direly needed for the country. He demanded of the government to make functional the historic textile factory.

Habibullah, a resident of Sherkat Bazar area, said the Sherkat area belonged to the textile factory but it had been grabbed by powerful individuals and the local administration lacked the ability to liberate the land.

Abdul Qadir Hameedi, operational in charge of the Gulbahar textile factory, said he had suggested the revival of the factory back in 2012.

He called the factory as a huge economic project, which he said needed to be revived.

He said the factory’s return to function required $500 million. He said some Indian representatives visited the factory with the help of the Ministry of Finance and pointed out security issues.

The factory has been discussed with Uzbek officials at the Presidential Palace and the Uzbeks have showed interest in reviving the plant.