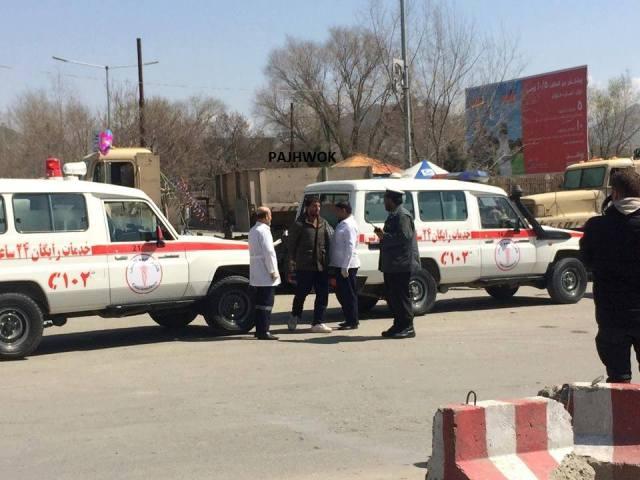 US, UN, NATO and others condemned the cowardly suicide terror attack close to Kabul University that killed at least 33 people and in injured dozens others.

“This shameful attack on a peaceful gathering to celebrate Nowruz has marred the new year with pain and tragedy.  Our thoughts are with the families of the victims who were injured and killed, and we mourn all those who lost their lives in this senseless attack,” the State Department Spokesperson Heather Nauert said.

“The United States stands with the people of Afghanistan, and we remain firmly committed to supporting the Afghan people’s efforts to achieve peace, security, and prosperity for their country,” Nauert said.

In New York, the UN Secretary-General condemned the attack in Kabul during the Nowruz celebrations near a religious shrine.

“Nowruz is a time of renewal and celebration, and should be a time for promoting the values of peace and solidarity. Those who have organized this attack must be brought to justice,” said a statement attributable to Stéphane Dujarric, spokesman for the Secretary-General.

“The Secretary-General extends his condolences to the families of the victims and wishes a speedy recovery to those injured. He expresses his solidarity with the Government and people of Afghanistan,” Dujarric said.

Custodian of the Two Holy Mosques King Salman bin Abdulaziz Al Saud has sent a cable of condolences to Dr. Mohammad Ashraf Ghani, President of the Islamic Republic of Afghanistan.
The cable was sent following the explosion in the capital Kabul and the resulting deaths and injuries.
Also Saudi Arabia Crown Prince Mohammed bin Salman bin Abdulaziz Al Saud in a message to President Mohammad Ashraf Ghani offered condolences and sympathies over deadliest bombing in Kabul on Wednesday, according to SPA.

The cable was sent following the explosion in Kabul and which resulted casualties and injuries.

India also unequivocally condemned the inhuman and barbaric terrorist attack in Kabul and extended heartfelt condolences to family members of the victims and wished early recovery to the injured.

“What makes this attack particularly reprehensible is the fact that the terrorists and their backers chose the festive day of Nauroz to carry out their heinous act, with the attacker trying to target a group of innocent Afghans who were celebrating Nauroz,” a media report said.

In a statement, US Ambassador to Afghanistan, John Bass, also expressed deeply saddened by the shameful attack near Kabul University at the start of the new year.

He said every citizen of Afghanistan soon would be able to live in peace, without fear of indiscriminate attacks by terrorists who have no respect for human life.

In a statement, European Union expressed its condolences to the families and friends of the victims and whished a swift recovery to those who were injured in the barbaric attack.

“As the European Union, we will keep working with the Afghan authorities towards reaching peace,” said the statement.

Tadamichi Yamamoto, Special Representative for Afghanistan and head of UN Assistance Mission in Afghanistan (UNAMA) also denounced the attack near to Kabul University.

“I reiterate that under no circumstances area such attacks justifiable, and I once again call on all parties to uphold their obligations under international humanitarian law, at all times,” he said.

“On behalf of the United Nations in Afghanistan, I express our deep condolences to the families of victims and wish a speedy recovery of the injured,” Yamamoto continued.

Pakistan strongly denounced the dastardly suicide attack close to Kabul University which many precious human lives were lost and a number of innocent injured, a media report said.

“Our deepest condolence and sympathies with the bereaved families who have lost loved once and pray for the speedy recovery of the injured.’

Mohammad Hanif Atmar, national security advisor, also strongly condemned the barbaric and heinous suicide attack on innocent civilians many victims of which were children and youngsters who were celebrating the arrival of new year.

“May thoughts are with victims and their families. I pray for the quickest recovery of those injured,” Amar said.

Former President Hamid Karzai also denounced the attack on innocent civilians who were celebrating the arrival of new year.

Karzai called the attack which martyred and wounded a number of innocent compatriots the act of enemies of peace, tranquillity and culture, as well as against all humans and Islamic values.