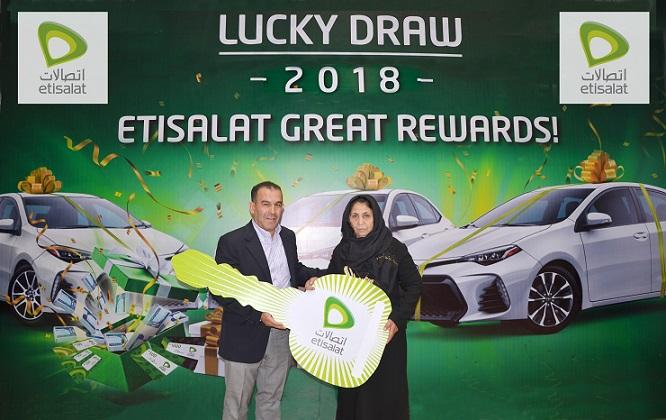 Fawzia, a 60 year old housewife from Kapisa, was announced winner after her name was picked in a random lucky draw carried out in the presence of Etisalat Afghanistan`s management.

‘I have never had a car and have used public transportation all my life.’ said Fawzia, ‘It`s like a dream coming true. Now I have a car and can travel at my own preference. Thank you Etisalat for making this possible.’

The car was given away as a part of Etisalat`s loyalty program. Customers spending 100Afs or more in a week could stand a chance to enter Etisalat`s grand lucky draw and win a car.

Etisalat Loyalty Program is Etisalat`s way of saying thanks to its customers by providing them with valuable incentives. In it, customers can earn points for using any of Etisalat`s services and can redeem them with numerous gift items, pay bills, buy airline tickets or talk-time.

Etisalat Afghanistan is part of Etisalat Telecommunications Group, headquartered in UAE, one of the largest telecommunications groups in the world. Etisalat Afghanistan launched their services in 2007 and has rapidly become the fastest growing telecommunications service provider in the country with an active base of 7 million subscribers. The company aims to be at the forefront of its market based on quality, innovative services and competitive pricing, with unsurpassed coverage in every province in the country. Since 2007, the company has invested US$ 400 million in Afghanistan and is the first telecom company to launch 3.75G services in Afghanistan.