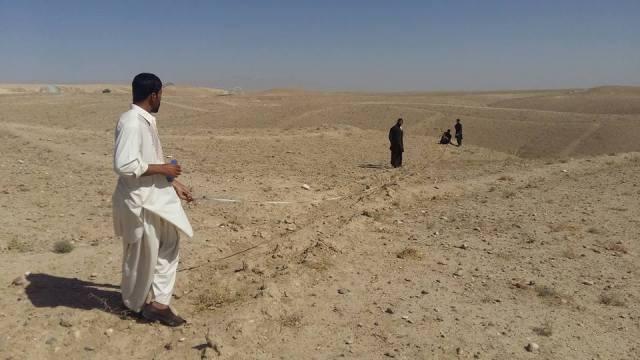 QALAT (Pajhwok): Residents and officials of southern Zabul province say some government organs in capital Kabul are creating problems towards construction of a standard cricket stadium in Qalat, the provincial capital.

Construction work on a cricket stadium in Qalat was launched a year ago with fund amounting to 34 million afghanis – a joint venture of the Ministry of Counternarcotics and the Ministry of Urban Development.

However, construction work on the stadium in Majid Zabuli Township was recently resumed after a delay originating from some problems. Local officials say the playground’s leveling has been completed.

Noor Ahmad, a cricket player in Qalat, said hundreds of players existed in Zabul but they lacked facilities and faced obstacles in polishing their talent.

He said many cricket tournaments were launched in the province during a year amid the lack of access to a proper environment for playing the game.

All residents of Zabul were happy when construction on the cricket stadium began last year in Qalat, but their hopes gradually faded now, Ahmad said.

Sher Ahmad, another resident of Zabul, a member of Etihad Cricket Team, said that their achievements so far would be lost if the cricket stadium was not built.

“There is no standard stadium and cricket players cannot practice on dust grounds”, he said.

Ahmad said the central government approved budget for the cricket stadium in Zabul after many requests, but the project was later suspended due to unknown reasons.

Cricket board officials in Zabul also confirmed problems facing the stadium’s construction but said they were trying to resolve them.

Mahbob Muhabbat, the cricket board head for Zabul, told Pajhwok Afghan News that construction of the cricket stadium in Majid Zabuli Township in Qalat woud cost 34 million afghanis financed by the Ministry of Counternarcotics.

According to Muhabat Khan, the provincial administration and the ACB have jointly sent a request to the President Office, demanding resumption of work in the area and the return of the land back to ACB.

However, the suggestion is yet to be reciprocated. Muhabat Khan said the ground was prepared and now they needed to launch work on the spectators’ venue. He, however, said there was an issue with the ground size and spectators’ place.

Muhabat said they wanted the ground to be 95 metres wide with international standards, but the construction company said they had been told the width to be 90 metres. “This issue is also pending with the PCB and as a result the construction work is stopped.”

Governor Khayal Mohammad Muhsani, who visited the construction site, said these issues were not acceptable and the central government should ask the authorities concerned to resume construction work on the stadium.

Muhsani said they had been striving to resolve the issue and help the construction work to be completed in time.

Provincial officials did not name any institution, but another source, who wished to go unnamed, said the Urban Affairs Ministry was creating hurdles in the way of cricket’s ground construction.

Nelofar Langar, spokesperson of the Urban Affairs Ministry, said in the beginning the construction work on the ground had to be delayed but it had been resumed recently.

She said earlier it was said that the area on which the ground was being built was a green area but after investigation it was cleared and the company was allowed to continue its work.

A civil society and employment.

The issue of cricket ground’s construction has been raised at a time when work on the airport and a 100-bed hospital in Zabul has also been delayed.