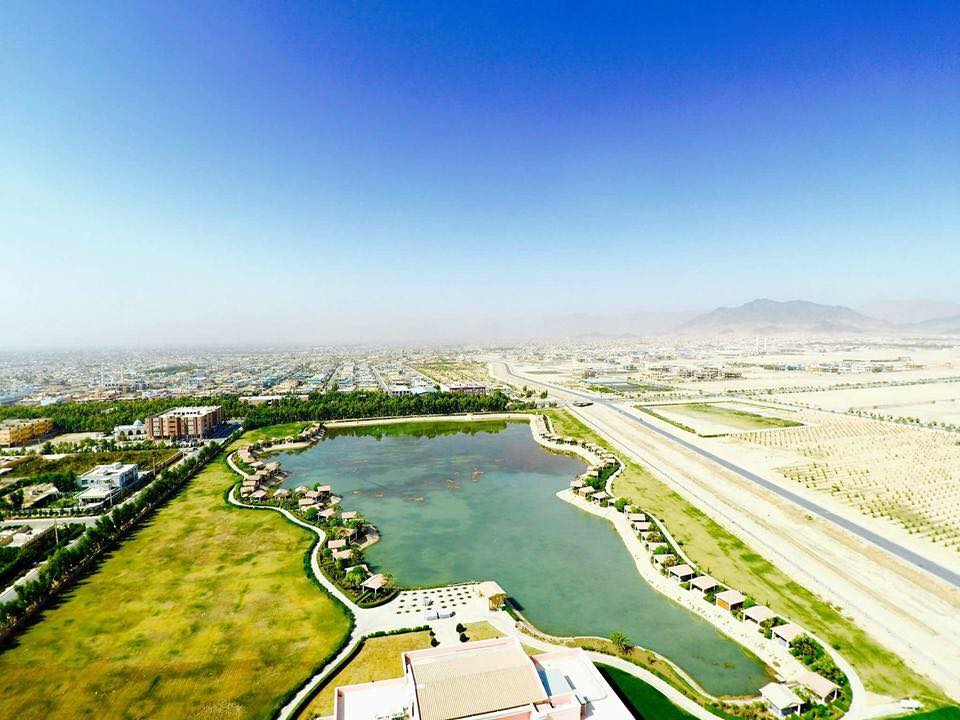 KABUL Construction Company (AFCO) claims his partner Mahmood Karzai has illegally registered a factory of the firm as his personal property whose revenue goes to his bank account.

But Mahmood Karzai rejects the claim as baseless, saying the factory belonged to AFCO, which he has opened to keep the firm from collapsing. He created the bank account in his name because the company’s account was inaccessible, he argued.

Pajhwok Afghan News findings show AFCO shareholders Abdul Hamid Helmandi and Mahmood Karzai are in conflict over company shares and a factory — an issue that led to the expiry of their firm’s licence.

Helmandi, a shareholder and deputy head of AFCO, claimed Karzai had illegally registered a factory of the company in his own name and collected more than $2 million belonging to the company.

For his part, Karzai confirmed the factory was registered in his name but, in reality, it belonged to AFCO. The bank account, where the income from the factory was deposited, was also in the company’s name, he insisted.

He explained he had created a new bank account because that of AFCO, whose licence had expired, was no longer accessible. AFCO’s original bank account that contains around $19 million was being operated by Helmandi, he said.

AFCO International was established in 2002 to participate in the reconstruction of Afghanistan.

Later on, Nadi sold his shares to the company. This Mahmood Karzai gained 40 percent of shares and the two others 30 percent each.

The 2016 statute of the company shows Helmandi and Hashim Karzai own 30 percent of AFCO shares each while Mahmood Karzai has 40 percent shares.

Hashim Karzai was killed in a bomb explosion at the governor’s house in December 2016 and his son Mohammad Yousuf now owns the shares.

Helmandi said after the expiry of the AFCO licence Mahmood Karzai tried to exploit the opportunity to reduce his (Helmandi’s) shares, become head of the company and give some shares to another man named Rahmatullah Karwan.

A letter to the Ministry of Industries and Commerce on May 7, signed by Karzai, says he and Helmandi own a little more than 28 percent shares each and Yousuf Karzai, son of Hashim Karzai, has over 14 percent of shares.

The letter says that Mahmood Karzai is the head of the company and Mohammad Yousuf his deputy. It adds both were appointed with the agreement of other shareholders.

However, Mahmood Karzai says: “The percentage of shares belonging to me and Helmandi is wrong, because the company has five shareholders (Helmandi, Mahmood Karzai, Hashim Karzai, Haji Mohammad and Abdullah Nadi). All have equal shares.”

He said that Helmandi did not accept Kamran’s share. But Helmandi says Kamran had no shares in the company and his name was not present in the statute.

The appointment of Mahmood Karzai as head of the company is also illegal and unacceptable because Hashim Karzai’s son cannot vote due to legal problems in his representation documents and fingerprints of Hashim Karzai’s mother are also non-existent, he said.

Karzai tried to renew the AFCO licence and make some changes in the company but government organs resisted the move, as the statute of the firm was absent and the deputy head refused to endorse Karzai’s decisions.

A letter sent to the Ministry of Industries and Commerce on October 17, 2017 sought renewal of the licence and approval of some changes to the company in absence of its deputy head, Helmandi continued.

The letter detailing company ownership says each of Karzai Helmandi and Mohammad Yousuf owns 30 percent of shares, while Rahmatullah Kamran has 10 percent.

Helmandi said the Kandahar industries and commerce department had rejected Karzai’s request for renewing the company’s licence. Subsequently, Karzai then sent the request to the chief executive officer (CEO), who referred it to the Ministry of Industries and Commerce. The ministry sent it back to its Kandahar branch.

A letter from Kandahar industries and commerce department says: “…The statute and decision of AFCO Company were not present; deputy head of the company (Helmandi) was not ready to come and sign the new statute. Therefore, a licence and statute could not be valid in the absence of the company’s other shareholders…”

Mahmood Karzai said he being head of the company tired to renew the company’s licence, but Helmandi did not agree with him.

They have to renew the company’s licence because all bank accounts of the firm are frozen and inaccessible.

Helmandi claimed the company license possessed by Karzai was fraud but Karzai said license with 100 percent shares meant it was his personal.

The AFCO Company won road construction project of Aino Mena in Kandahar back in 2003 and most of its work had been completed.

Helmandi said the AFCO Company has created the AFCO Construction Material Production and most of its machinery to construct water management system of Aino Mena was imported from India.

AFCO Construction Material Production factory’s production license a copy of which received by Pajhwok showed the linces was issued by the the Afghanistan Investment Suppor Agency (AISA) in late 2015 with Mohammad Hashim the factory’s head and Rahmatullah Dilsoz his deputy.

Helmandi says: “I was in India when some financial issues emerged in the company, on my return from Indian the company license was converted to Hashim Karza’s name. When I asked him that why did you do this so he told me in order to quickly finish the finical issues of the company and we are friends such things never matter?

Meanwhile according to the company licenses obtained from the Commerce and Industries Ministry back in 2015 the license of AFCO Construction Materials Production license is under Mahmood Karzai’s name and Rahmatullah Dilsoz his deputy.

Helmandi also presents another forma letter regarding the AFCO Construction Materials Production which is part of the AFCO Company. The letter was sent to the Afghan United Bank.

The letter a company of which provided by Helmandi to Pajhwok was issued on the 10/04/2017 and maintained the signatures of Helmandi and Mamood Karzai.

Where are the company’s millions of dollars?

Helmandi says Karzai has two private bank accounts in which he has deposited nearly two million dollars from the municipality and Aino Mena project.

But Karzai says these bank accounts belong to the company and he opened the accounts to run the company because $19 million in Helmandi’s account had been frozen.

He says according to Afghanistan banking law, no one has the right to deposit a company’s income in his own account.

He also says Mahmood Karzai has sent a letter to all Aino Mena employees asking them to transfer all money they receive from customers to the certain bank accounts.

According to him, some people have been deceived, moving about $2 million of Aino Mena and municipality money to Karzai’s accounts. He emphasized Karzai’s bank accounts had no link with the AFCO company.

In recent weeks, Karzai had been warning Aino Mena customers over the National Radio and Television to submit the remaining money on the given dates, otherwise their plots wound be cancelled.

“Karzai does not have any legal right to warn people that their lands will be reverted. The residents and land owners should know their money is going to Mahmood Karzai’s personal bank accounts, not to the Aino Mena project’s account,” Helmandi remarks.

He says: “If people still fear their land will be taken back from them, they can transfer their money to the bank account of the AFCO construction company.”

Karzai says he and Abdul Hamid Helmandi had no access the company’s general bank account in the Afghan United Bank due to a dispute over renewal of license and because money was withdrawn with Helmandi’s sign, so they were required to open new bank accounts in the Maiwand Bank.

Karzai added: “I was forced to open a new account for (new license) and transfer the revenue to the new account in order to run the company and we have an accounting office.”

He says contractors, employees and clients-related accounts were delayed for months, with some complaining to the governor’s office. About new bank accounts in Maiwand Bank, he informed they belonged to AFCO Company.

Karzai provided a balance sheet of the Afghan United Bank and AFCO Company to Pajhwok, saying around $19 million would remain blocked until the license was renewed and Helmandi agreed.

But Helmandi called Karzai’s claims as baseless and said the main bank account of AFCO company was in the Afghan United Bank and its money was not blocked and company could use it.

According to Helmandi, Karzai has brought down the price of land in garden area of Aino Mena without consulting him in order to make the customers deposit their money in Karzai’s account.

He adds: “(Mahmood Karzai) for his own satisfaction registered the property in his name without my involvement, while I’m also his partner and my agreement should be there. The property may worth $24 million.”

He says Karzai named these assets after him in a way that he emerged both seller and buyer and there were no one’s else signature on the documents.

Helmandi provided some more copies to Pajhwok in support of his claims.

In this regard, Karzai says one meter square land was given to residents $75 and $78 who had deposited only installment each years ago.

But the clients gathered several times, saying their economic situation has wakened as compared to the past and they could not afford buying the plots and constructing homes, demanding a cut in the land price.

He says the company then helped them and reduced the price to $40 one meter square on the condition that all installments would be deposited until August 2018.

The clients then started depositing money in the new bank account in Maiwand Bank because the previous accounts had been blocked due to not renewal of license and were not accessible.

“He (Helmandi) believed we would incur losses in this project, but we showed him documents that we will not face losses, but he did not accept it, now he calls the clients and say don’t purchase the land,” Karzai says.

About Helmandi’s claims that Karzai has grabbed some joint property, Karzai adds: “We (Hashim Khan, Helmandi, Karzai) had been working in this company without taking salaries and I told them we will get lands instead of money.”

“I give them the right to choose land of their choice and they did so, selecting better land than me and everyone has the right to sell or give it to someone,” he continued.

He says they helped some people and provided them land free of cost, but Helmandi maintained he would count all the money.