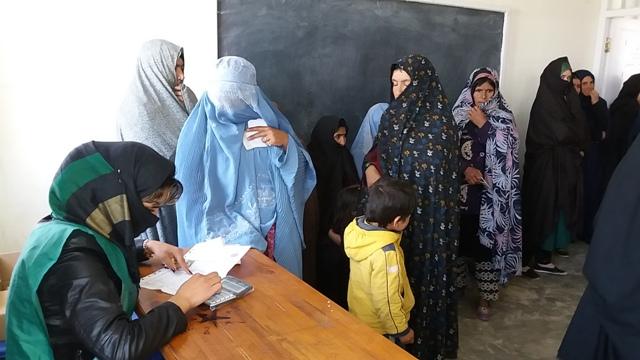 KABUL observers would oversee the upcoming polls due to security, cultural restrictions and other reasons, something that could affect transparency and women’s participation in the democratic process.

The Wolesi Jirga elections are scheduled for October 20. Insecurity, seen as major challenge for elections, is among reasons that would keep female observers from overseeing the elections.

Free and Fair Election Foundation of Afghanistan (FEFA) head, Yousuf Rashid, said he planned to have 9,500 observers including 35 percent of them women. But finding female election observers in districts and remote areas was a difficult job, he said.

He said they faced problems like insecurity, traditions and family restrictions in hiring female observers.

Lack of financial resources was another problem election watchdogs faced as they could not pay salaries to women to observe the election process, Rashid added.

He said FEFA was paying $50 to each election observer working in the organization for seven days including the Election Day.

A problem in the past election was that IEC had to task men in some specific polling stations that were supposed to be managed by women, he said.

FEFA employs people from area where election process is ongoing, so they are able to simply visit polling stations on the Election Day, he added.

“The international community’s dying down enthusiasm towards funding the election process and the IEC’s lack of emphasis on election observation make the upcoming polls less transparent compared to the past elections. thre will be a very limited number of election observers,” Rashid said.

“Insecurity, cultural restrictions and social problems as well as death threats to female observers are issues that make it impossible to employ women as observers in many areas, he said.

“The IEC has not yet announced how many and in which areas only women polling stations will be set up, if the commission employs female workers in polling stations, then we would be able to have female observers,” he said.

“This problem is not confined only to the election observers, the IEC is also unable to open special polling stations for women voters in many areas of the country,” he said.

IEC would monitor its personnel and observers to ensure transparent election

Badghisi added efforts were underway to recruit female teachers on the Election Day but most of districts were without women teachers — an immense challenge for the panel.

Abdul Qadeem Karokhel, head of the IEC branch in Kabul’s Khak-i-jabar district, told Pajhwok they had no female teacher. Only two female teachers, driven by a sense of patriotism, were going to the district from Kabul daily but they might not do so on the election day, he said.

Karokhel added there were 14 voter centers for women, where 54 female staffers would be needed on the election day.

A resident of Maidan Wardak province, who wished to go unnamed, said that she wanted to work as an election observer due to her economic problems, but she would never go out of the provincial capital for that job due to security problems.

“Except Behsud, all other districts of this province are unstable, I don’t believe there will be elections, I will never go to districts or leave Maidan Shahr city for monitoring elections ,” she said.

She said her family also did not allow her to work outside the provincial capital.

Huma Ahmadi, a female candidate in the Wolesi Jirga elections, said a limited number of female election observers would negatively impact the polls and women would not be able to vote for candidates of their choice.

She said female voters did not go to polling stations managed by men only.

He said insecurity was another reason women showed no interest in working as observers while families too did not allow their women and girls to do such jobs.

However, IEC deputy spokesman, Zabihullah Sadat, said security organs had assured them of security of 5,100 polling stations and 21,000 areas and there was no problem for female election observers.

He said election oversight institutes could hire female observers in areas where election affairs were managed by female IEC staff.

But Sadat did not say how many polling centers would be managed by women across the country.

FEFA head, Yousuf Rashid, said limited number of female election observers would negatively impact the polls and it would lead to use of ‘women’s proxy votes’.

In last elections, some reports said that women did not go to polling stations but their votes were polled by men.

TEFA head Ayubzada also said women would not go to polling stations managed by men and that would leave a negative impact on elections.

Shahzada Khanum, 60, a resident of the capital of Maidan Wardak province, said: “Women cast their votes only in polling stations which are managed by women, it is because women know better the language of women and they get proper direction there as to how to us their votes, but we cannot vote in areas which are controlled by men, our men also do not let us go there.”

Ayubzada said the problem would not resolve in a short period of time, but if female observers were paid more privileges and the issue was discussed with local influential figures, it could be resolved to most extent.

Rashid also agreed with Ayubzada and said coordination among election oversight institutes should be improved for better observation.

He said civil society institutes also could encourage women to work as observers in the election process.

According to the IEC, around nine million people with 34 percent of them women have registered as voters across the country.

The commission says 2,565 people including 417 of them women are contesting the Wolesi Jirga elections.