Statistics show 73 people were killed and injured on average daily in Afghanistan in 2018. Both summer and winter remained deadly. Of every 13 casualties, four happened in the summer.

Pajhwok’s reports based on different sources indicate 16,010 people were killed and 10,679 others injured in 2,390 attacks during the outgoing year.

The number of casualties was higher in airstrikes and suicide attacks, which also took a toll on civilians, the retired military officer argued.

In targeted attacks, roadside blasts and sticky bomb explosions, the number of casualties had been lower.

Of the least attacks, two happened in Panjsher and four in Nuristan.

Gen. Taqat, military affairs expert, the number of attacks was up in Nanagarhar province last year because besides the Taliban, Daesh narcotics another reason of insecurity.

Taqat also noted ethnic causes of fighting, especially in insecure province. The attacks and casualties were up in Kabul, compared to other provinces, because the militants wanted to show the world their strength.

According to reports, most of the 271 attacks took place on October 20 — the Wolesi Jirga election day. But most casualties (620) happened on May 15.

In a coordinated Taliban attack on Farah City on May 15, each side claimed inflicting casualties on the other. Rebels, security forces and civilians were among the dead and wounded.

However, Pajhwok could not share separate and exact numbers of the dead and injured in each category because of conflicting figures issued by different sides. 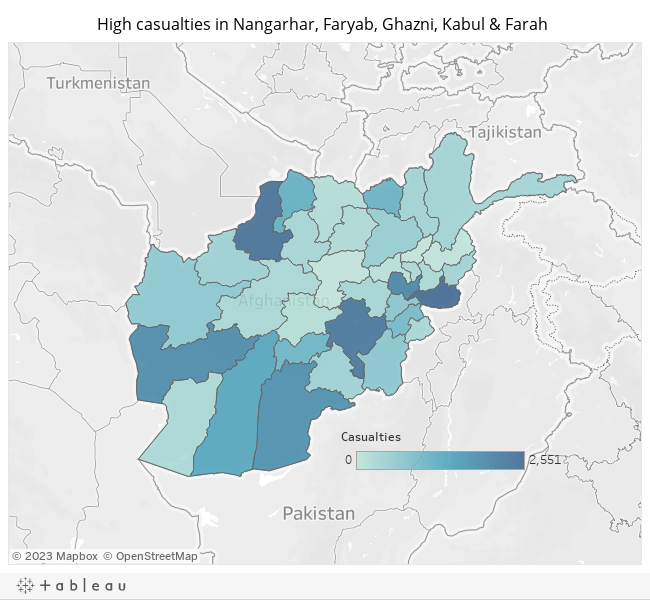 Militants have been fighting Afghan and foreign security forces for the past 17 years. The exact number of casualties before 2018 was not available. But in the years past, there had been some let-up in fighting during the winter season, resulting in a decline in casualties.

Gen. Taqat said fighting declined in the winter when militants found it hard supplying their forces properly. Additionally, he explained, the slow supply of equipment also hindered their movement.

He added poppy could not be cultivated in the winter, and hence a decline in fighting during winter.

Bibi Gula, 45, a resident of Farah’s Pushtrod district of Farah whose brother was recently killed by Taliban, said: “Those being killed, whether militants or soldiers, are our children.

“We hope both sides reach a peace agreement and renounce conflict,” she said, adding her brother’s children had been orphaned. The orphans are living in pitiable situation.

The martyred soldiers’ families would be in similar situation, believed Gula, who asked the warring sides to reach a peace agreement and put an end to the killing of Afghans.

Attaullah, a resident of Maidan Wardak, said one of his friends was wounded during a firefight between Taliban and security forces. “Afghans are being killed under different pretexts. I want the warring parties to renounce fighting and work for peace.”

He also urged the international community to help Afghanistan’s warring parties reach a peace agreement and prevent interference in its affairs by other countries.