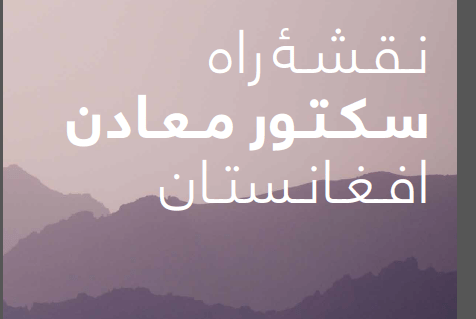 KABUL Natural Resources’, a strategy approved by the government in 2017, suggests that Afghanistan could become an average income country from a low income in few decades if the strategy is implemented properly.

Abdul Qadir Mutfi, spokesman for the Ministry of Mines and Petroleum (MoMP), said the ‘Roadmap for Afghanistan Natural Resources draft was approved by the High Council of Economic Affairs in December 2017 and endorsed by the Cabinet earlier this year.

“This roadmap contains the overview of natural resources in the country and discusses challenges and shortcomings in the mining sector, legal framework, necessary reforms, creation of industry and market places.”

The MoMP writes that natural resources of Afghanistan are estimated to be of $3 trillion worth but these riches could not be exploited based on mutual consensus.

The ministry says a number of studies have been conducted to know the exact worth of natural resources in the country.

Despite being rich in mineral resources, Afghanistan made little progress to develop its large-scale mines in the 20th and 21st centuries.

According to the road map, the main reason for this trend has been the existence of a wide range of impediments which could not be resolved until now.

In the roadmap, major problems have been identified in extractive industry sector, including transport, energy and water, land, rule of law, security, and procurement, past issues, social participation, environmental issues and human resources.

In this map, measures to promote transportation of large minerals and heavy metals to markets, significant investment, having a large infrastructure to provide energy for mining activities, a clear policy on water use and environmental standards and long-term investments are underlined.

In the document, the process of obtaining land in Afghanistan is called a “complex and uncertain process” for investors, but it is noted that Afghanistan has ratified the relevant law and given it to the Afghanistan Independent Land Authority.

With reference to oil and gas contracts through the Procurement for Transparency Office, it has been written that, in order to secure the most important projects, a four-year security work plan has been made.

The Ministry of Mines writes about issues remaining from the past that the database is refining contracts and is now solving legal and financial issues in previous contracts using the legal system.

The ministry says part of income from mineral extraction should be spent in the mining areas.

About environment related issues, the roadmap says, “All mining contracts require environmental studies and National Environment Authority (NEA) is responsible for that.”

About efforts at identifying gaps with regard to information of natural resources with relevant organs, the ministry said identifying required skills for a sustainable use of natural assets in the country and investing in systems and educational institutes for boosting capacities was its fundamental goal.

The roadmap calls not accepting shortages particularly of electricity and transport a challenge and a reason that contracts for Mes Aynak Copper Mine in Logar and Hajigak Iron Oxide Mine in Bamyan made little progress since contracts for these were signed.

Logar’s Mes Aynak Copper Mine contains more than 12 million tons of copper and is one of the world’s largest copper mines. The contract for extraction of this mine was signed in June 2008 between the Afghan government and MCC, a private Chinese company.

The B-C-D sections of Hajigak Iron Oxide Mine were awarded to a coalition of companies under the leadership of SAIL/AFISCO consortium of India while the A section of the mine was awarded to a Canadian company, Kilo Gold Mines, on December 28, 2011.

The roadmap says the mining plan for different parts of the country would be either developed according to the security situation of the mining area or security of such areas would be fully maintained before practical work was launched on them.

“We will decide whether we should resolve these challenges one by one or deal with them simultaneously on regional level. In other words, it may be difficult to deal with security, transpiration and electricity problems across the country quickly, but it may be applicable that we deal with some of these issues at the same time in a specific area, in such a situation, we should adopt our strategies for transportation, providing electricity, security and others with the mining strategy,” the roadmap says.

A special and comprehensive framework can be effective in attracting investments because it can help ensure transparency and assurance in a contract.

The roadmap says despite the Minerals Law was amended three times after its approval in 2005, but four issues still persisted in the law that needed to be addressed.

The four issues include the right to decision, the bidding process, categorization of mines and reality rate.

Based on the law, issuing identification licenses, small scale mining, professional mining and rock and constructional materials mining needs approval of the Ministry of Mines and Petroleum, while the licenses of mines exploration and extraction requires the approval of High Commission for Investment and the Cabinet.

The roadmap says, “The right to decision mentioned in the Minerals Law authorizes the Ministry of Mines and Petroleum to approve contracts, currently the mines and petroleum minister has the authority to make decision on contracts for detection, small scale mining and constructional materials and big contracts are approved by the Cabinet, these changes should be made as soon as possible for decision making.”

It says the current law should determine bidding process for all types of contracts and the law should clearly explain categorization of minerals.

The certain document shows that the current classification method is more dependent on the area of ​​the mine to distinguish it from that type of license and the classification has caused confusion as both firms and employees of the ministry simply divide a mine area into smaller blocks just for the sake of achieving their approval and done in a way which did not need the Cabinet approval.

For example, precious stones and construction materials in the mining category should be on small scale, the copper should have an extraction license; these changes must be applied in the law as soon as possible.

The source also stressed that all licenses should be reviewed by the technical board before being submitted to the High Council of Economic (HCE) and the Cabinet.

About royalty in the road map, it is noted that investor confidence and the flexibility of the state should be taken into account. Most countries have legal frameworks according to which they negotiate the rates of contracts and have adopted legal frameworks in which royalty rates are specified in the law.

The source further added “The outcome of such a change adds to investors’ confidence during the extraction process.”

In addition, the exercise of such a legal change would give the government the power to turn exploration licenses into operating licenses. “If a company finds out what minerals are discovered during the exploration phase, there will be no need for financial negotiations.”

The road map emphasizes that the MoMP main duties should be redefined for the development of mineral sector.

Currently, the MoMP has its own policymaking, regulatory, and operational departments, with a staff of more than 2,200 and by the passage of time the ministry will maintain its role in the policy-making sector and will give up its regulatory and operational roles.

Creation of industry and regional bazaars

The Ministry of Mines and Petroleum should create a licensing and accreditation process until the precious stones are processed in Kabul and exported to international markets in India, China, and other countries through air corridors.

The mentioned document also notes that as a result of investments made in the iron melting area within the last three years, the domestic production of this industry has reached 220,000 metric tons, which could meet the current demand of 33 percent population. Construction of railways and energy systems will meet the minimum demand for two decades and will also stimulate economic growth in the medium term.

In the roadmap, essential changes in the mining sector, if correctly applied, will take decades to turn Afghanistan from a low-income country into a middle-income country.

“The report provides a roadmap that will help us to focus on ensuring that Afghanistan’s natural resources benefit every citizen in the country,” the source said.

The MoMP writes, “The major resources of the country have been outlined and so as the strategy of the Islamic Republic of Afghanistan, according to which, in the decades ahead, the mineral sector will act as the engine of Afghanistan’s growth.”