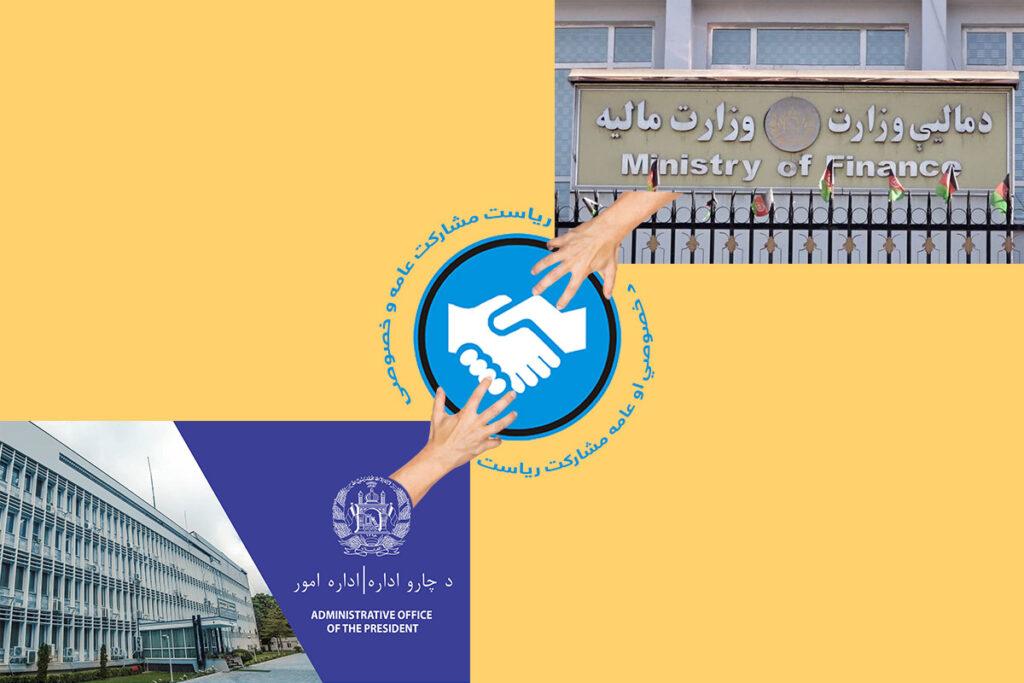 KABUL (Pajhwok): Experts term the transfer of the Department of Public and Private Partnership (DPPP) from the Ministry of Finance to the Administrative Affairs Office (AAO)through a legislative decree as illegal.

However, the Administrative Affairs Office (AAO) at the Presidential Palace insists the transferis aimed at creating efficiency and providing more facilities to businessmen.

The DPPP was formed in March 2015with the aim of organizing policy, establishing legal framework, consulting and coordinatingcapacity building in the public and private partnership, analyzing and evaluating projects.

Other objectives of the directorate are to provide technical facilities for departments and development of public and private partnershipbased on the decision of High Economic Council (HEC).

However, on April 26 of this year, the Presidential Palace ordered the transfer of the directorate from the MoFto the AAO with the intention of having accountable management in order to facilitate and support investment of the private sector under the Investment Facilitation Unit.

The AAOin its suggestion No. 31 to the President and based on the Presidential Palace decree No. 35 dated February 19, 2019says that the DPPPshould be transferred to the Administrative Affairs Office and the president had decided on that time by issuing a decree No. 13 on April 26 of this ongoing year.

After the Presidential decree No. 35legal status eliminated, the Minister of Finance met with the presidentand under the president’s verbal order, the DPPPcontinued operations within the framework of the MoF.

And later the President issued another decree No. 626 on June 12, 2020, approving the DPPP continuation in the MoF under the Deputy Finance Minister.

But the AAO again brought pressure on the Ministry of Justice through a separate letter to correct the relevant legislative documents in coordination with the Investment Facilitation Unit of the AAO and to take measures as soon as possible.

But the MoF in response to the above letter, on June 4, 2020, wrote in a detailed report to the AAO that shifting of the DPPP to the Investment Facilitation Unit has already been discussed during a meeting with the President and the DPPP will continue its work within the framework of the MoF until completion of its legal process and it will be transferred by the Ministry of Justice and approved by the former HEC within the framework of the MoF.

A copy of a letterfrom the Investment Facilitation Unit department on May 14 this year says the draft amendment of the legislative documents of the DPPP have been sent to the Ministry of Justice to work on itat the earliest possible.

Article 22 of the lawsays“The administration is obliged to send the initial draft of the legislative documents along with its explanatory reasons in order to evaluate the contents of paragraph (1) of Article 9 of this law for the approval of the of Finance and Economy Ministries and to others relevant departments.”

But an official at the MoF, who wished to go unnamed, told Pajhwok Afghan News, “AtaullahNasib, head of the Facilitation and Investment Unit of the AOO has repeatedly pressured the MoJ to amend the Public Partnership Department law as soon as possible without permission from the MoF to pave the ground for transfer of the DPPP to the AAO.

He said five days back the MoF law committee discussed the amended draft but as the Wolesi Jirga was on vacation, the President wanted to issue a legislative decree to transfer the office to the Investment Facilitation Unit of the AAO as soon as possible.

The National Assembly is currently on it 45-day summer recess.

SediqSediqi, spokesman for the Presidential Palace, said he had no information in this regard and said the MoF should be asked about the issue.

According to him, the administrative affairs office has said nothing about the matter to MoF and that the department is operating within the ministry’s structure.

Shamroz Khan said the transfer, change or merger of departments was the authority of parliament and such actions should be taken in a legal way.

Article 90 of the constitution says the National Assembly is responsible for the creation, modification and/or abrogation of administrative units.

Khoshal Khalil, the AAP media manager, said the Directorate of Public and Private Partnership wound be transferred from MoF to the Department of Investment Facilitation through a legislative decree as soon as possible.

The Ministry of Justice said in a report the first meeting was held on the transfer of the department on August 19 and it was attended by officials from ministries of finance, economy, commerce and industry, public health affairs, as well as the chamber of commerce and industry.

Based on suggestions from the participants, another meeting was held on August 22 and the transfer of the DPPP to the Administrative Affairs Office was opposed by MoF officials.

However, the transfer of the department was approved by representatives of other ministers, while officials of the ministries of economy, urban development, women affairs and Supreme Audit Office did not attend the second meeting.

The MoJ report said: “The amendments suggested by the Administrative Affairs Office at the Presidential Palace via decree No 13, dated March 25, 2020, will be investigated.”

QaziNazir Ahmad Hanafi, deputy head of the Wolesi Jirga’s legislative affairs commission, said amendments to or takeover of ministries was not the authority of the president, who did not have the power to propose a division of ministries.

“The transfer of the directorate of public and private partnership of the MoF to the AAO is against the law and as soon as the Wolesi Jirga at its first session (after the end of summer vacations), will be cancel this decree,” he added.

Hanafi claimed the transfer of the department to the Administrative Affairs Office amounted to the misuse of money by the president, something that has been seen in other cases as well.

NasrullahStanikzai, a professor at the Faculty of Law at Kabul University, says the Administration Affairs Office is in fact the President’s Secretariat, which has no executive authority and is not accountable to the Wolesi Jirga.

He added: “Unfortunately, both under the National Unity Government and now, we have seen that legislative orders are misused. According to the law, the government can use a legislative decree in urgent cases.”

Stanikzai alleged this kind of behaviour was tantamount to monopoly of power by the president, who did so without being accountable to parliament.

GulRahmanQazi, head of the commission of monitoring the implementation of the constitution, said: “The president is a monopolist and always tries to strengthen his grip on the entire administration.”

Referring to efforts for transferring the department to AAO through a legislative decree, he said: “Parliament has risen for its summer recess and the president understands his legislative decree will not be debated by lawmakers for months.”

He insisted the president was in a hurry to transfer the department to AAO. If he paid heed to the depth of the issue, ineffectiveness of the move would become clear, Qazi reasoned.

But Khoshal Khalil rejected the analysts’ remarks, saying the department would be transferred to AAO to make it more effective and provide more facilities for businessmen.

He claimed the law allowed the president to issue a legislative decree in case of need during the parliament’s recess. The decree would be sent to the assembly after the recess was over, Khalil said.

Article 79 of the constitution states: “During the recess of the house of representatives, the government shall, in case of an immediate need, issue a legislative decree, except in matters related to budget and financial affairs.

DPPP involved in projects worth around $1 billion

The Projects of Directorate of Public and Private Partnership (DPPP) is involved in various projects related to promotion of public-private partnership in various sectors under the Finance Ministry framework.

The report available with Pajhwok Afghan News shows the projects of services, electricity, production, transport are being executed in cooperation and coordination with relevant departments.

The projects worth around $1 billion are as following.

This project was initiated in Kandahar with the capacity of producing 15MW electricity from solar energy. The project is almost completed with the 5.19 million afs investment from the DPPP.

This project was also initiated in Kandahar with the capacity of producing 15MW electricity. The Zolarstan Company invested 5.19 million investments in this project

The Dyansty Company has invested total of 15 million afs investment in the 10MW solar electricity production project in Kandahar province.

This project was initiated in Helmand province with the capacity of producing 100MW electricity. The 77 Company invested $175 million in this project. With this the annual production would reach to 857 Gaga Watt per hour.

The Ghazanfar Group in cooperation with the IFC invested $75 million in this project that has the capacity of producing 52MW electricity from gas in the Dehdadi district of Balkh province.

In the project $29 million has been invested in the YatemTaq district of Jawzjan by Bayat Companies. It has the capacity of producing 40MW electricity.

This is one of the important projects of DPPP in the country. The AKFED planned to invest $631 million in this project to supply electricity to the people of Badakhshan province. The total investment in this project could soar to $1 billion.