3 months on, contractor yet to get fueling project 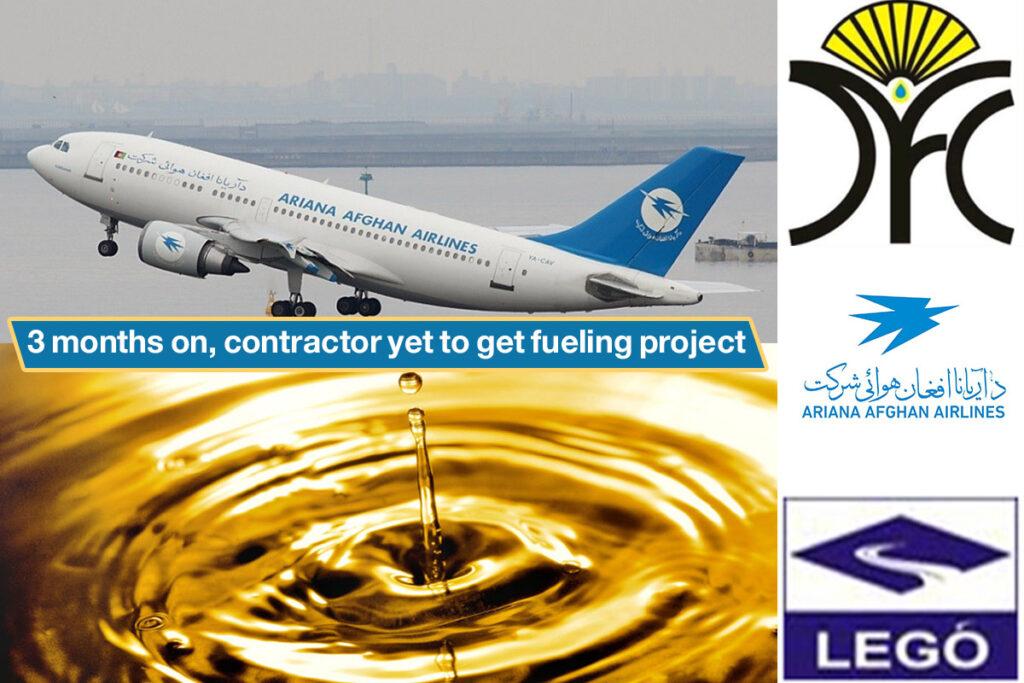 3 months on, contractor yet to get fueling project

KABUL (Pajhwok): The Afghan Lego, which won a contract for supplying fuel to the Ariana Afghan Airlines (AAA) three months ago, says it is yet to be handed over the project.

The previous contractor — enjoying good relations with some high-ranking officials — was still providing fuel for AAA, the company claims.

Pajhwok Afghan News’ findings show that the contract was signed with Afghan Lego Company, which the National Procurement Authority (NPA) had previously called inappropriate for the project.

Currently, the fuelsupply project is being reconsidered instead of being handed over to the contract-winning company.

AAA flights have reportedly been delayed for hours due to lack of fuel and the airline has suffered due to irregularities.

According to NPA, the National Fuel Company is responsible for fueling AAA aircraft from the beginning of 2018 until the end of 2019.

For this reason; some facilities of the Afghanistan Civil Aviation Authority (ACAA) at the airport have been rented out to the company.

A letter from the National Procurement Commission (NPC) Secretariat, whose copy is available to Pajhwok, says the project (procurement and providing fuel for the TC-1 planes of AAA) was given to Afghan Lego. It was approved by NPC on April 25 this year.

The letter quoted NPC as saying: “In light of Article 54 of the country’s procurement law, the bidder (Afghan Lego), which offered the lowest price was awarded the project.”

The contract for this project, prepared on the basis of open bidding in accordance with a presidential decree, has been signed between Afghan Lego and AAA on July 4 this year.

On August 19, AAA wrote to Afghan Lego to start supplying fuel to Kabul, Herat, Kandahar and Balkh airports. It promised the organs concerned will cooperate with the company’s fuel tankers and the ACAA should also take measures in line with the NPC decision in the field of providing fuel distribution facilities.

Also, the General Directorate of the Hamid Karzai International Airport wrote to the National Fuel Company on September 7 that Afghan Lego Company be given all available reserves.

The letter also asked the border police command not to allow the National Fuel Company to unload fuel into stocks and take goods out of the area.

The source, wishing anonymity, said the National Fuel Company had lodged a complaint with ACAA and the first vice-president.

But the company argued it had invested a lot in fuel facilities and would not hand them over to the Afghan Lego until the company’s investment was determined.

The source added: “The company(National Fuel) has not made any investment in facilities other than painting installations. The investment should have been based on a contract because the facilities belong to ACAA and the company had reached no agreement with it.

“The National Fuel Company should shift its goods and vacate the facilities for the contract-winning company,” the source concluded.”

According to the source, the fueling project has not been handed over to Afghan Lego because of National Fuel’s complaint. The NPC, subsequently, replied the matter should be reconsidered.

In a decision on August 17, the NPC — which is operating under the president — said about the implementation of the project: “All available reserves should be made available to the new contractor, and findings and considerations regarding the company should be sent by the office of the first vice-president to the legal adviser to the president to prepare a report after its review.”

Ahmad RaminAyaz, NPC’s director of strategic communications and information, also confirmed the National Fuel complaint and claims of investment in the facilities and its fate should be determined were the reasons behind the re-evaluation of this project.

He added the report of the first vice-president and legal advisor office on the issue had not been submitted to the president and the NPC for implementation.

On whether the issue caused delays in AAA flights and caused losses, Ayaz said: “The Ariana Afghan Airlines can operate in accordance with previous arrangement and can get the required fuel from the former National Fuel.”

He said only on September 20, an AAA flight was delayed for two hours but no loss was suffered by the airline.

But a source in AAA confirmed to Pajhwok that its flights had been delayed twice for hours due to lack of fuel and the national flag-carrier had suffered losses as a result.

He said the airline was currently facing major problems, as its activities had been affected and the company’s reputation damaged.

“Even in early days, all the three companies refused to sell fuel to AAA, but the problem was somehow resolved because the fuel purchased from other companies on cash payments.”

He informed the contractor (Afghan Lego) had agreed to pay for the difference in retail purchase. On this account, the company has deposited $120,000 in AAA’s bank account.

SayedRomal Sadat, an official of Afghan Lego company, without naming anyone, said: “The former company (National Fuel) is using its relations with a number of officials and trying to prevent the new contract (transfer of the contract to Afghan Lego) under different excuses.”

He said although their firm won the contract and signed the agreement according to the project procedure and conditions, but the airport facilities were yet to handed over to the company and the ACAA had not yet introduced Afghan Lego to the airports.

Nor handing over facilities:

Sadat said: “When we came to know that the company (National Fuel) and the ACAA were not willing to hand over the facility, we wrote a letter requesting the relocation of mobile stockpiles and to start fuel supply, although this was also approved by the relevant departments and preparations were made but no cooperation was extended in this regard.”

According to him, the Afghan Lego company was even ready to use the stockpiles made by Davy Oil company in airports and their company was willing to use it against rent but the request was no accepted.

But ACAA wrote a letter on July 29 to the General Directorate of Airports that: “Due to the fact that a special decision regarding the company’s fueling facilities has not been sent to this office and the company (Afghan Lego) does not have a fueling facility in any airport of the country, cooperation should be made with the company during the entry of its fuel tankers after necessary security checks and approval from the responsible security institutions in order to temporarily prevent delays in AAA flights,.”

Ahmad RaminAyaz, director of the Strategic Communication and Information at the NPA, said for some reasons the contract did not mention the facility, which was decided by the NPC and the fare was determined.

Bashir Ahmad, in charge of National Fuel company, told Pajhwok that he did not want to talk in this regard.

Mohammad NaeemSalehi, spokesman for ACAA, said efforts were being made to resolve the issue of fueling and handing over of the facilities to Afghan Lego.

Contract with company was called inappropriate before:

The contract signed with Afghan Lego was not consider as appropriate and was rejected by the Infrastructure Procurement Investigation Department of the NPC secretariat and AAA.

Prior to approval of the fueling project and its contract with Afghan Lego, the certain department had reported that the Afghan Lego, which ranked first in terms of price rating, did not fill out the standard bid forms which were incomplete and thus rejected.

According to the report, the board of directors at AAA said the National fuel company has more capabilities based on documents and figures it provided.

RaminAyaz said although the report had been submitted by the department to NPC prior to approval of the project, but the commission considered it necessary to sign it with Afghan Lego.

Responding to a query if the contract was awarded to this company under government officials pressure, he said: “Since NPC is the highest decision-making body in the field of public procurement and comprised the president, vice-presidents, ministry of finance, economy, justice, legal presidential advisory and the decision-making method in the NPC is done jointly with presence of national and international observers, thus the issue of pressure on decisions of the commission is completely baseless.”