Saleh should be forced to resign: Lawmakers 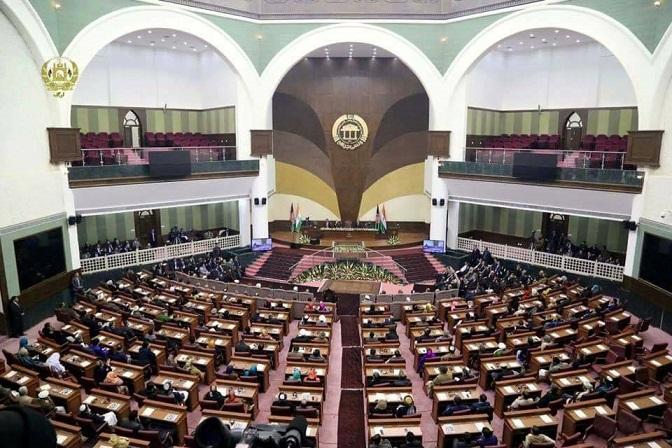 Saleh should be forced to resign: Lawmakers

KABUL (Pajhwok): The Wolesi Jirga or lower house of Parliament on Tuesday angrily reacted to Vice-President Amrullah Saleh’s accusations of corruption against some lawmakers and called for his resignation.

Vice President Amrullah Saleh has accused some lawmakers of their involvement in mega corruption cases, and said they have not been investigated yet.

Addressing a side-event on the margins of the Geneva Conference on Monday, he claimed certain parliamentarians were involved in massive corruption.

“To this date, unfortunately, Afghanistan hasn’t been able to bring any member of parliament to justice,” the VP regretted. However, he did not name any lawmaker to be involved in corruption.

The article 101 of the constitution says, “No member of the National Assembly shall be legally prosecuted for reasons of voting or views expressed during performance of duty.”

The article 102 of the constitution states that if a member of the house is accused of a crime, a responsible official should inform the relevant house for legal prosecution.

The lower house was on Tuesday expected to grant trust vote to nominees for ministries of women affairs, transport, public works, refugees and repatriation, urban development and land and mines and petroleum, however, angry lawmakers denied entry to the ministers-designate to the house and discussed today Saleh’s remarks.

Ghulam Hussain Naseri, a lawmaker from Kabul, said, “The corrupt representatives should be named, these MPs passed from the government’s filter during election, if they are corrupt then why the government let them run for election.”

He said Saleh should apologize to the parliament and no one could usurp the authority given by the constitution to lawmakers.

Mahmod Khan Nasrat, a lawmaker from Kandahar province, said, “The first VP has insulted this house in an international conference, it is our responsibility to prove our innocence, otherwise we will be deemed corrupt.”

Abdul Rouf Inaami, a representative from Badakhshan province, said that the dignity of lawmakers was questioned in an international meeting. “It shows the government is a failure,” he said.

He said the Wolesi Jirga was not an executive organ to commit corruption. “Fighting against corruption should start from the Presidential Palace,” he said referring to Saleh.

Mohammad Batash, a lawmaker from Kunduz province, said, “Saleh’s statements against a lawmaking institution shows that he is not a national leader, he also does not know about the law, he refers to foreigners to seek protection from lawmakers, he should have read the law if he knew about it.”

Sher Mohammad Akhundzada, a lawmaker from Helmand province, said that Saleh should specify corrupt lawmakers with evidence and the whole house should not be insulted for a few.

He asked the VP to apologize to the Wolesi Jirga and said Saleh’s wealth needed to be compared with his wealth 19 years ago.

A number of other lawmakers held similar views and said the expenses of the Green Trend, an organization of the first VP, should also be specified.

The house appointed a delegation to prepare a statement in response to Saleh’s remarks.

Qazi Nazir Ahmad Hanafi, talking on behalf of the delegation, who read out the statement said that remarks by Saleh were in conflict with articles, 26, 25, 85 and 154 of the construction.

He said that Saleh has damaged the legitimacy of one of basic powers of the government with his remarks.

“We, members of this house, want from the president to force Amrullah Saleh, his first VP to resign, for consolidation of the system and prevention of chaos,” he said.

If the president did not take action, the house will act based on the article 69 of the constitution, he said.

The case shall be presented by the individual appointed by the Loya Jirga. In such a situation the provisions of Article Sixty-Seven of this Constitution shall be applied.”

Wolesi Jirga speaker, Mir Rahman Rahmani, said Saleh’s claims were shameful.  He said the Green Movement Party led by Saleh was an intelligence organization and funded by a particular country since its creation. He said Saleh tired to recruit a number of commanders to his organization.

“We are not in confrontation with the government, only a person wants to damage the relations of two state pillar for seeking his personal interests,” he said.

Rahmani asked Saleh to provide evidence about corruption of lawmakers, otherwise the house would suspend voting for ministers-designate.

The Wolesi Jirga has recently given trust vote to 10 of total 24 ministerial nominees replacing acting ministers.