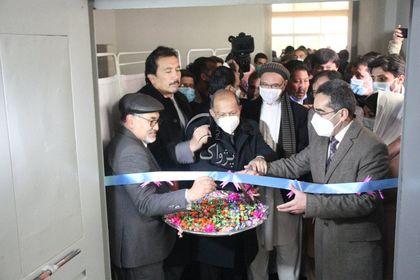 KABUL (Pajhwok): A Pakistan-gifted oxygen production plant has been inaugurated at the Muhammad Ali Jinnah Hospital in Kabul.

The Pakistan embassy here said the hospital was demonstrative of Islamabad’s goodwill gesture where free treatment was being provided to Afghan patients.

The installation of the plant would help doctors treat Covid-19 patients effectively. The plant has the capacity of providing oxygen to more than 200 beds in addition to 50 oxygen balloons per hour and around 1,200 balloons in 24 hours.

Jinnah Hospital, a 200-bed, state-of-the-art medical facility in Kabul, was funded by the government of Pakistan.

It was initiated in 2007 under the Pakistan Technical Assistance Programme and handed over to the Afghan government in 2019 on completion.

Mansoor Khan said that Pakistan had pledged $1billion in assistance to Afghanistan. Three hospitals — Jinnah Hospital in Kabul, Naib Aminullah Hospital in Logar and Nishter Kidney Hospital in Jalalabad — were completed at a cost of $72 million.

He stated: “We have proposed converting this hospital into a post-graduate teaching hospital, where doctors trained in Pakistan could continue their post-graduate training under the supervision of leading medical institutes of Pakistan.”

The ambassador also spoke of his wish to extend the existing facilities in Jinnah Hospital by incorporating a cancer block and other facilities as required by Afghan patients.

Pakistan has been closely coordinating with the Afghan government through the Ministries of Health and Foreign Affairs on the proposals.

He elaborated on Pakistan’s new visa policy for Afghan nationals, according a special priority to patients. Even serious patients were given visas on the Torkham border, reflecting Islamabad’s commitment.

The inauguration ceremony was attended by health professionals and other dignitaries.