KABUL (Pajhwok): Fake twitter accounts are spreading rumors regarding political asylum offer to President Ashraf Ghani by Canada and such misinformation has become widespread on social media since the start of the peace process.

The president’s asylum offer turned into a hot topic between Twitter users and Deputy Interior Minister Sediq Sediqqi on the Twitter page of a spokesman for the president today.

The controversy erupted a day after Canadian Prime Minister Justin Trudeau, in a telephone conversation with President Ghani last night, expressed concern over the growing insecurity in Afghanistan and backed a peace process that would ensure a stable, independent and prosperous Afghanistan.

Earlier, a twitter account the Defender of Republic wrote: “PM Trudeau to President Ghani: Afghanistan needs you currently more than any time in the past. I will be pleased to see you in Canada, your services in infrastructure development and rehabilitation are always needed in Canada.”

Farhadi later made another tweet saying the Presidential Palace had asked him to remove the tweet but he replayed that “you may do your tweets and I will do my tweets.”  He wrote: “This is a type of democracy that we need in Afghanistan.” 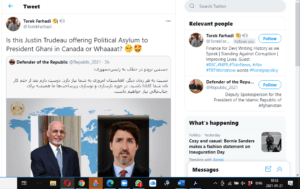 Both sides discussed NATO defence ministers’ meeting in Brussels and stressed there was need for a coordinated and joint political stance for Afghanistan in the conference to ensure that peace talks reach their logical conclusion.

Sediqqi in response to TorakFarhadi wrote; “The account you referred to is incorrect, please check it with assistant presidential spokesperson Fatema Morchal.”

Fatema Morchal, assistant presidential spokesperson, said the Defender of the Republic was not his official account, claiming that some fake accounts have been created in her name.

He said misinformation on fake accounts negatively impacted public minds and they would not believe in accurate information regarding the peace process as well.

Nasrat Naseri, spokesperson for MoCIT, said their ministry could act against fake accounts when complaints were lodged against them.

He added the ministry could send request to concerned companies to stop the functioning of some pages, adding that if the request was not against the policies of certain companies, they would act against such social media pages.

Outcome: The presidential statement has no mention of the rumor that Canadian PM Trudeau had offered president Ghani an asylum in his country during their telephonic conversation.

Presidential assistant spokesperson, former spokesperson and deputy interior ministry had rejected the rumors and added the accounts that spread such rumors were fake.

Verdict: Twitter claim that Ghani offered asylum in Canada is wrong in the presence of available evidence