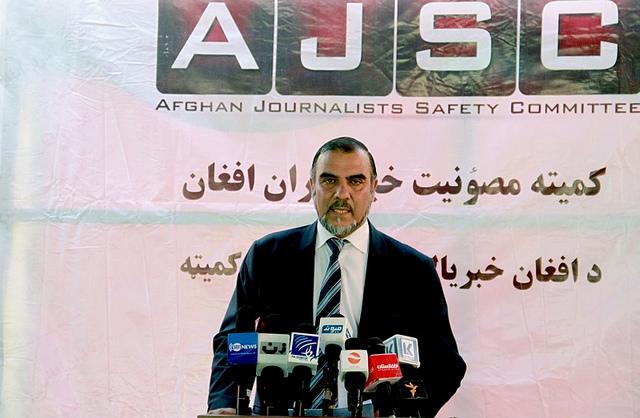 KABUL (Pajhwok): The presence of women journalists and media workers has decreased by 18% in the Afghan media over the past six months, a statement from the Afghan Journalists Safety Committee (AJSC) said on Monday.

This is an alarming decline portraying the deteriorating situation of female journalists and their work in the media, the statement said.
AJSC regularly collects figures of media, journalists, and media workers from all 34 provinces of the country to update its database of journalists and media, and this time more than 90% of the country’s active media participated in the survey.

According to the findings of this survey, more than 300 women journalists and media workers have left or lost their jobs due to factors such as security threats, especially the recent targeted killings, growing financial challenges of the media posed by the COVID-19 outbreak, and low payments.
The figures of the first six months of the solar year 1399 (April – September 2020) showed that there were 1,678 women working in various positions for media outlets across the country. But this figure has now dropped to 1377, which shows a decrease of 18%.
Out of 1377 women who are currently working in the media, 321 of them are journalists and the rest are working in various media departments such as media production and administration. According to the findings, most female media workers are in Kabul province, followed by Herat, and Balkh province.

Logar is the only province where only one woman is working as a media worker.
In 9 provinces of Ghor, Nimroz, Sar-e-Pul, Laghman, Parwan, Kapisa, Uruzgan, Wardak, and Logar, there are no female journalists and only female media workers are employed in various media departments. In five provinces of Nuristan, Kunar, Paktia, Paktika, and Zabul, there are no women in the media. According to the survey, in the last six months, two female journalists who previously worked in Zabul and Paktia provinces have now left their jobs due to increasing security threats.
It should be noted that in the current solar year (1399), 4 female journalists and media workers have been killed in direct attacks, and this has had a negative impact on the work of women journalists across Afghanistan.
Afghanistan is celebrating International Women’s Day this year at a time where security threats against journalists and media workers, especially women in the media, have intensified. The Afghan Journalists Safety Committee (AJSC) is deeply concerned about the current situation and believes that the presence of women in the Afghan media is a vital need for free media and free information space.
pr/nh