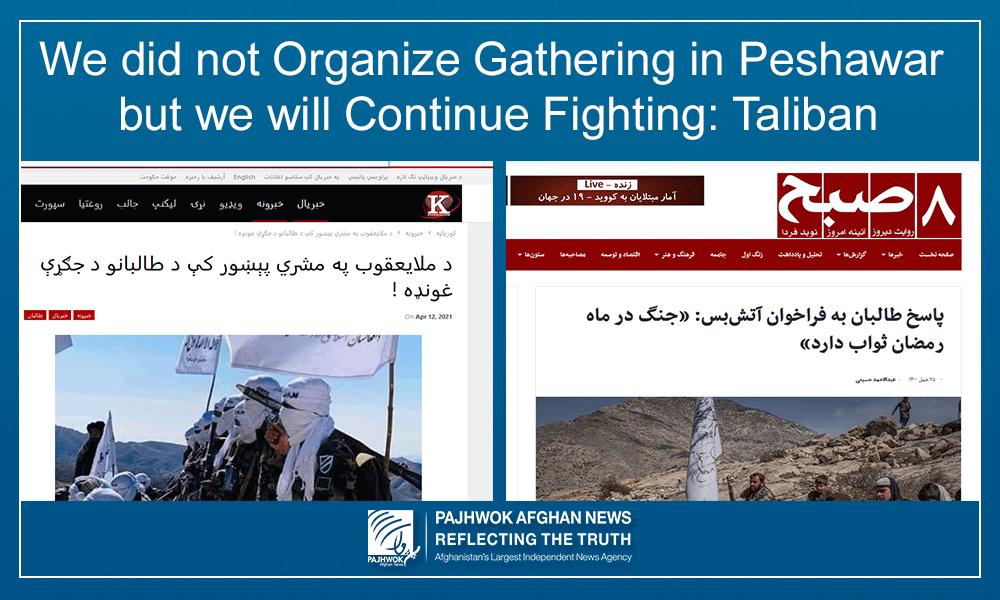 KABUL (Pajhwok): The Taliban have rejected their leadership held a meeting in Peshawar, the capital of northwestern Khyber Pakhtun Khwa province of Pakistan, but acknowledged saying the fight has more reward during Ramazan.

Claim:
Hasht-e-Subh Newspaper reported that the Taliban in response to people’s demand for ceasefire in Ramadan said. “Fighting has more reward during Ramazan and the rebels will fight during the holy month.”
This piece is circulating in social media as well.

Fact Check:
Taliban Spokesperson Zabihullah Mujahid said Jihad has more reward in Ramazan and the Taliban will continue fighting security forces during the month.
He said the Taliban had decreased violence as compared to the past. He said the rebels were in defensive posture in limited areas and in some areas the Taliban showed reaction to Afghan security forces operations.
He said: “There is need for time and an agreement to ceasefire. We need to understand that our legitimate demands could be fulfilled politically, not through fighting.”
This comes as President Ghani on Wednesday in his Ramazan message said: “Durable ceasefire is the legitimate demand of the people. The Taliban should agree to ceasefire and work for the establishment of peace instead of investing on unlawful war.”
The Global Muslim Ulema Union and the Afghanistan Independent Human Rights Commission (AIHRC) also asked the conflicting parties to observe ceasefire in respect to the holy month of Ramazan.

Claim:
Khabaryal Website two days earlier reported that an important meeting of the Taliban leadership headed by Mullah Yaqoub held in Peshawar. SerajuddinHaqqani, MaulviKabir, Maulvi Abdul Hakeem Sharae, Noor Mohammad Saqib, Maulvi Abdul Qadir and other Taliban leaders participated in the meeting.
The report said: “Some Taliban governors and military commanders were invited to the meeting held on April 12. The Taliban ordered military commanders to accelerate fighting in Afghanistan by destroying roads, bridges and public property.”
The meeting decided that all military commanders of the Taliban should return to Afghanistan and it is possible that in order to put pressure on the government the Taliban may resort to group and suicide attacks.
According to the source, the meeting made these decisions because US forces in Afghanistan may not leave the country by May1.
According to Doha Agreement between the US and the Taliban, all foreign forces shall leave Afghanistan by May 1, but Washington Post on Tuesday reported that US President Biden has postponed foreign forces pullout until September 11.

Fact Check:
Taliban Spokesperson ZabihullahMujahid rejected reports regarding the Taliban meeting in Peshawar and said: “There is no reality that the Taliban organized a meeting in Peshawar. Khabaryal website also disseminates information favouring Presidential Palace and has strong connection with the intelligence agency of the enemy, the website tried to confuse public minds.”
Outcome: Khabaryal Website reported that the Taliban Peshawar meeting decided resorting to heavy attacks and violence in response to US announcement of not pulling out its forces from Afghanistan by May 1. The Taliban reject this claim but acknowledged they would continue their armed fighting during Ramazan.
Verdict: The Taliban meeting in Peshawar is an unproven claim, but accelerating fighting in Ramazan is true
Nh/ma