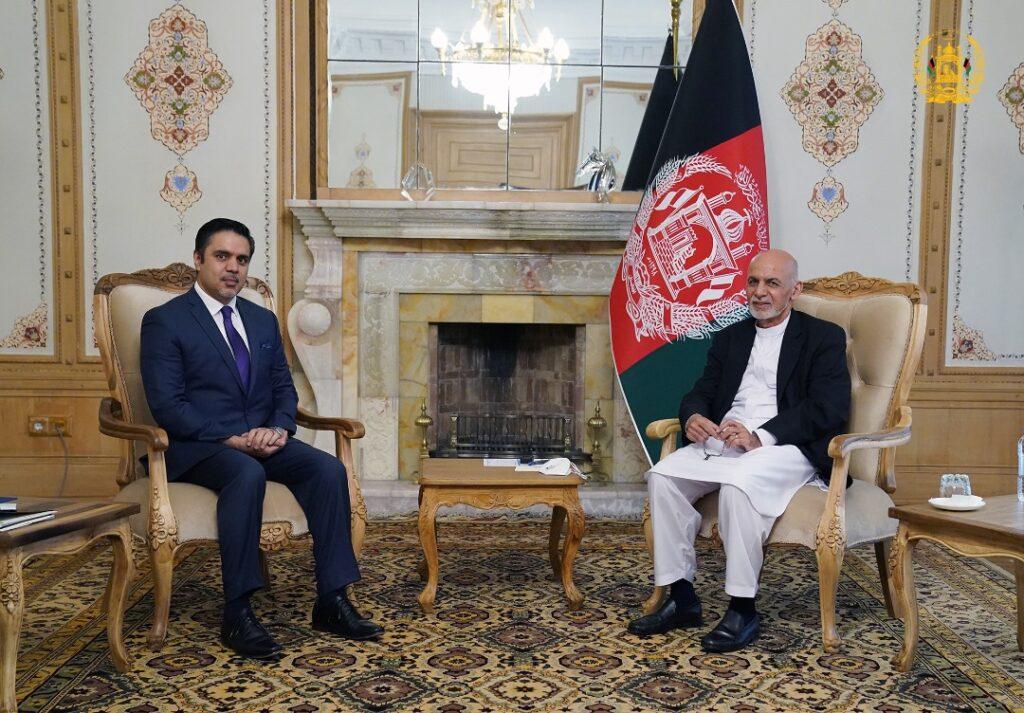 Afghanistan is one of the eight member-states of the South Asia Cooperative Environment Program (SACEP).

As part of his SACEP country visit, Haidari briefed the president on the various programs and priorities of SACEP aimed at helping its member-states adapt to and mitigate the impact of climate change on South Asia as one of the most vulnerable world regions to the adverse effects of global warming.

At the same time, he encouraged increased regional cooperation and coordination through SACEP to address the intertwined challenge of air, plastic, and nitrogen pollutions in South Asia that contribute to climate change.

On the plastic pollution, he discussed SACEP’s collaboration with the World Bank and Parley for the Oceans to implement the Plastic Free Rivers and Seas for South Asia (PLEASE) project at the cost of $50 million.

“Under the PLEASE project, SACEP looks forward to providing capacity support to the National Environmental Protection Agency of Afghanistan (NEPA) for drafting its national plastic waste management action plan, while Afghanistan’s public, private, and non-profit institutions could benefit from the regional block grants of the PLEASE project on a competitive basis. This investment should help them innovatively recycle and upcycle plastic waste, thereby reducing plastic pollution and mitigating its impact on public health,” said Director-General Haidari.

President Ghani comprehensively discussed the vulnerability of South Asia and that of Afghanistan to climate change. He noted that “the cycle of drought has drastically shortened, from a 33-year cycle to now a five-year cycle.

“Our seasonal rainfall now comes in spring instead of winter, and with it, lethal floods, and destructive erosion. The southeastern part of our country is now believed to have gotten 1.5 degrees warmer in last 40 years. Deforestation has been rampant due to the last four decades of conflict,” the president said.

Those most affected included protracted internally displaced persons (IDPs), including many youths, whose desperation to support their families in the face of widespread unemployment renders them exploitable to recruitment by terrorist networks.

“This shows how climate change has a direct impact on national security in the Afghan context with far-reaching implications for regional stability and international peace.”

To address the challenge of environmental degradation and its impact on Afghanistan, President Ghani noted that the country “has tremendous potential for clean energy production and green industry.”

He said, “We have some of the most abundant supplies of sun, water, and wind, which if harnessed, can collectively produce 300,000 megawatts of power.

This green energy can power green industry in Afghanistan.” He added that “work is already underway. Multiple regional energy projects are underway, including the TAPI pipeline and the CASA-1000 transmission line.”

Moreover, the President said, “we are building hydropower stations across the country and scoping the potential for wind and solar.

“We recently signed an agreement with Siemens Energy that positions us to become the regional hub for reliable, sustainable and affordable energy.”

In this light, he added, “we have the potential to serve as a platform for environmental cooperation and coordination across the region. Climate change is not a national problem, but a global one which requires regional and global problem-solving.”

Director-General Haidari appreciated President Ghani’s informed comments and feedback, including his strong emphasis on regional and international coordination and cooperation to address what is a global challenge confronting and threatening the whole humanity.

He too thanked the President for strongly supporting Afghanistan’s three-year term of leading the work of SACEP, as well as for his consistent support of all regional cooperation platforms, especially SACEP, in whose initiatives, conferences, seminars, and other forums Afghanistan has actively participated.

SACEP is also grateful to Afghanistan and its other member-states for providing the organization with financial support to build its new secretariat headquarters office in Colombo soon.