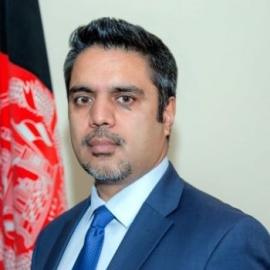 In a message on Sunday, he said South Asia houses a diverse range of ecosystems but at the same time remains one of the world’s most vulnerable regions to the adverse effects of climate change caused by continued degradation of ecosystems and biodiversity across the world.

“Humanity has altered 75 percent of the Earth’s ice-free surface; since 1990, 420 million hectares of forest, equal to three times the size of South Africa, have been lost; and nearly one million species face extinction, while illegal wildlife trade is the fourth largest illegal trade crime in the world.”

Ambassador Haidari said changing weather patterns were expected to impact directly over 800 million people by 2050. Between 2000 and 2017, disasters caused by natural hazards in the region caused damages worth $149.27 billion. The economic impact of the global COVID-19 pandemic has only exacerbated this, affecting poor daily wagers and farmers the most from Sri Lanka to Afghanistan.

He said climate-vulnerable Afghanistan was probably hit the hardest, as climate-induced droughts and flush floods have internally displaced the country’s youth and deprived them of their rural jobs, which terrorist and criminal networks have replaced with paid violent and criminal activities.

“This shows that environmental degradation in South Asia not only harms public health but also undermines peace and prosperity with far-reaching implications for regional stability and international security.

That was why, he said, this World Environment Day, SACEP welcomed the declaration by the United Nations of this “Decade on Ecosystem Restoration.” This decade-long effort aims to prevent, halt, and reverse the degradation of ecosystems on every continent and in every ocean.

In the year ahead, he said, SACEP would encourage bolder regional policy interventions and adequate investments towards the implementation of all 17 sustainable development goals (SDGs) with a special focus on sustainable production and consumption to conserve our nature, on which the health and wealth of all South Asians depends.

“At the same time, we call on the developed countries and multilateral financing institutions to increase their climate support to the most vulnerable countries of South Asia, enabling them to take needed mitigation and adaptation measures against climate-induced disasters.”

To that end, he said, SACEP was looking forward to collaborating with all member-states to achieve the core objectives of our mission: “to support conservation and management of natural resources of the region and to work closely with all national, regional, and international institutions, governmental and non-governmental, as well as experts and groups engaged in such cooperation and conservation efforts.”