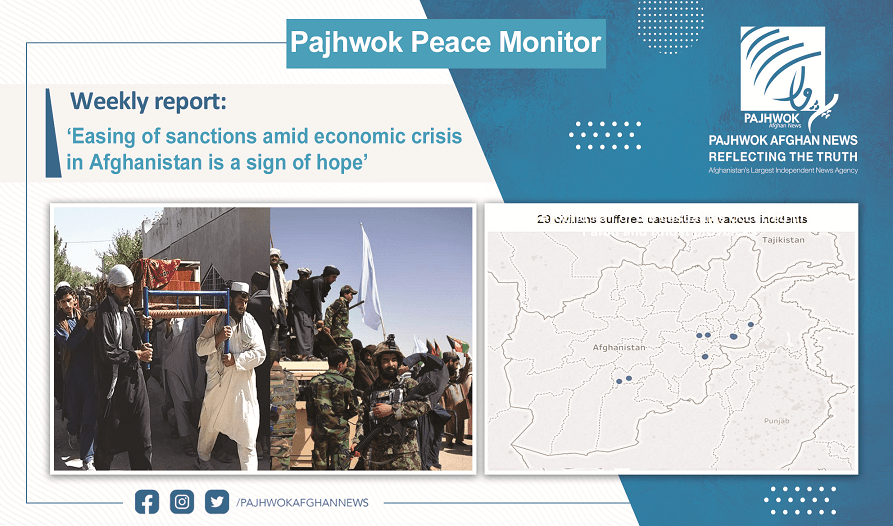 KABUL (Pajhwok): Last week, 56 people were killed or wounded in Afghanistan as reactions from the world including the US about the caretaker government of Taliban seemed soft due to economic crisis facing the Afghans.

The past 40-year conflict finally comes to an end after the Taliban captured Panjshir province on September 6. Last week may be marked as the second week in the past decades in which no civilian was killed or injured and no conflict related incidents happened.

However, reports show that 28 people were killed and 28 others injured in various incidents last week.

Reports also show that four people were killed by Taliban on the charge of helping Daesh.

According to reports, a soldier was killed and another was wounded in targeted attacks in Uruzgan province, two former soldiers committed suicide in Paktia and Kunar provinces last week. Two people were killed and a third wounded in targeted attacks in Kabul while three people were killed in an armed dispute over ownership of land in Paktia province last week. 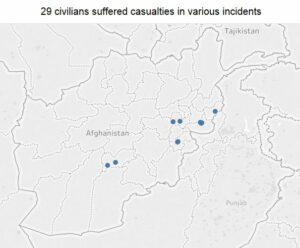 The previous week, eight people were killed and six others wounded in targeted attacks in various parts of the country.

After the Taliban took control of Afghanistan, many countries showed various reactions about the Taliban’s caretaker government.

Some of these reactions were harsh including freezing of Afghanistan assets by the US which also caused limited banking services and serious economic problems for people. Some other countries, however, showed soft reactions while some others announced their support to the new administration.

The world in general wants from Taliban to form an inclusive government and respect human rights.

The Taliban introduced and appointed most of its cabinet members and they say that the cabinet is mostly inclusive. The Taliban say that they would try to bring more positive changes to the cabinet while people criticize them that it is not inclusive as there were no women in it.

US president Joe Biden in his speech to the UN’s general session said that the US has opened a new phase of diplomacy with Afghanistan.

According to reports, the US Treasury Department on Friday said it issued two general licences, one allowing the US government, NGOs and certain international organisations, including the United Nations, to engage in transactions with the Taliban or Haqqani Network – both under sanctions – that are necessary to provide humanitarian assistance.

China, on the other hand, said that economic sanctions on Afghanistan should be removed as soon as possible and the frozen money of the country was national asset of Afghans and it should be unfrozen and should not be used as a political pressure.

Mohammad Bin Abdul RahmanThani, Qatari foreign minister, on the sidelines of UN session, said that Taliban could bring changes and cooperation of Islamic countries on the regard was important.

“Taliban are not like they were 20 years ago, maybe those who were fighting different than those negotiating. But I do not say that they are modernized or became more extremists, but changes can be seen,” he said.

Indonesia said that the country would support an inclusive government in Afghanistan which would also be stable and independent.

Pakistani prime minister, Imran Khan has said that he has started negotiations with Afghanistan neighboring countries about building an inclusive government in Afghanistan.

He said that he would make a decision about recognizing the new administration of Afghanistan, together with Iran, Tajikistan and Uzbekistan.

UN secretary general said that five permanent members of the UN Security Council demanded an inclusive government in Afghanistan. Five permanent members of UNSC have said that they want Afghanistan to respect the rights of girls and women and an inclusive government should be formed there as well as ‘terrorists’ should be no longer given safe haven in the country.

Acting Afghan foreign minister, Amir Khan Muttaqi in a letter to the UN general session, asked for a speech from Afghanistan in the session. He introduced Mohammad SuhailShaheen as Afghanistan envoy to UN, but the meeting did not accept Taliban’s participation.

We want good relations with the world: Taliban

Prime minister of the caretaker government, Mullah Mohammad Hassan Akhund said that China, Russia and Pakistan should continue their cooperation with Afghanistan. He asked these countries to encourage the US and the world not to mount more pressure on the Afghan people.

Hundreds of people in Kabul in a demonstration asked the US and the international community to unfreeze the assets of Afghanistan so it would help prevent further poverty in the country.

A number of women’s rights activists in Kabul gathered in front of the women’s affairs ministry which is now changed to guidance ministry by Taliban and said that the rights of women should be protected and they did not want anything in violation to Sharia.

Khost tribal elders in a meeting asked the international community, particularly the US, to make good diplomatic relations with the new Afghan government.

A large number of people in Khost also demonstrated in support of the Taliban and asked for unfreezing Afghanistan assets. They asked the international community to recognize the Taliban’s government.

RohullahPiarokhel, a resident of MaidanShahr, capital of MaidanWardak province, said, “Easing of sanctions in the wake of economic crisis in Afghanistan is encouraging. We hope that the Islamic Emirate would play good politics in relations with the world, and the world which calls themselves defenders of human rights should provide humanitarian assistance to Afghans who are devastated by decades of conflicts instead of sanctioning them, they should help so Afghanistan move out of current economic crisis.”