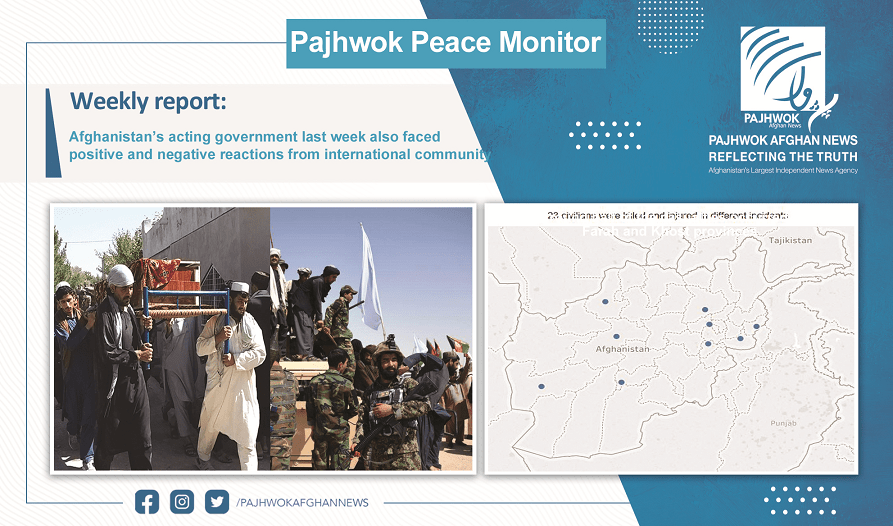 KABUL (Pajhwok): The Taliban acting administration faced negative and positive reactions from the international community for a straight second week.

The incumbent acting administration in response to the international community’s reactions vowed to mainatian cordial ties with the world at a time when it has a long way to get globally recognized as a government.

According to reports last week 16 people were killed and nine others injured in different incidents of violence in the country. 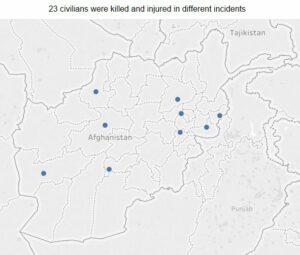 No group claimed responsibility for these attacks and blasts.

Nearly one and a half months earlier the Taliban captured Kabul City. Since then different world countries expressed different reactions, some were harsh such as freezing of Afghanistan cash reserves by the US that prompted economic, cash and banking cisis in the country. Some countries showed soft reaction and one way or the othere backed the Taliban government despite not recognizing them officially.

As a whole the world nations have asked the Taliban to form an inclusive government and respect basic human rights.

The Taliban cabinet included acting ministers and said this cabinet was open for more inclusivity. They said efforts were on to bring positive changes in the cabinet. At the same time the acting cabinet came under fire from public saying it is not inclusive and there was no presence of women in the Taliban government.

Pakistan said the international community should not leave the Taliban alone and should trust them so they could move like a responsible government.

Qatar foreign ministry said the international community should not hide its eyes from stability and facts on the ground. Doha asked its friendly countries not to isolate Afghanistan.

The World Health Organisation (WHO) also pledged support to Afghansitan’s health system and added needs of Afghansitan health system would be presented in front of international community members.Turkey said if the international community recognized the Taliban, Ankara would work with them. Albania urged world not to leave the people of Afghanistan alone.

US defense secretary says that it did not require Taliban’s permission to conduct attacks against ‘terrorists’ inside Afghanistan, while the Afghan government condemned the US position and said it was unacceptable to it and called it aggression. The government said that it would seek ways to prevent such moves.

The US chairman of the joint chiefs of staff has said that the Taliban did not implement many parts of Doha agreement and they still had close relations with Al Qaeda while the Afghan Ministry of Information and Culture denied the statements.

Over 20 senators in the US Senate presented a bill for imposing sanctions on Taliban and Pakistan, but the Taliban have repeatedly said that they had explained sanctions on their leaders with the US in Doha Agreement.

Russian foreign ministry has said that the Taliban’s recognition issue was not on their table for now. This comes as Russia has taken a soft position on the caretaker government of Afghanistan and Russia in a way supports it.

Indian prime minister said that the world should prevent Afghanistan from becoming the center of terrorism and no country should use the current situation of Afghanistan for their own interests.

These reactions come as the Afghan embassy in Switzerland posted on its Facebook page that some leaders of the Ghani government are continuing to work as a government from abroad, but many condemned the move and Mujahid said it does not worth a response.

Tajikistani president, on the other hand, stressed on formation of an inclusive government in Afghanistan and said that Tajiks were not given enough part in the caretaker administration. However, Afghan officials said that Tajikistan should not interfere in Afghanistan affairs and they would not let anyone incite ethnic violence in the country.

Russia asked Afghanistan and Tajikistan to resolve their problems in a way acceptable to both sides.

We want good relations with the world: Govt.

The caretaker government’s officials say that they want good relations with the world and they do not want Afghanistan to become the ground for proxy competitions. They voiced on countries to reopen their embassies in Kabul.

The government introduced SuhailShaheen as Afghan envoy to the UN, but Ghulam Mohammad Ishaqzai is still the current Afghan envoy to UN, who refused to give a speech to the UN General Assembly.

The future of Afghanistan and its relations with the world is unclear, causing Afghans to face with serious economic problems and  worry about the future of their country.