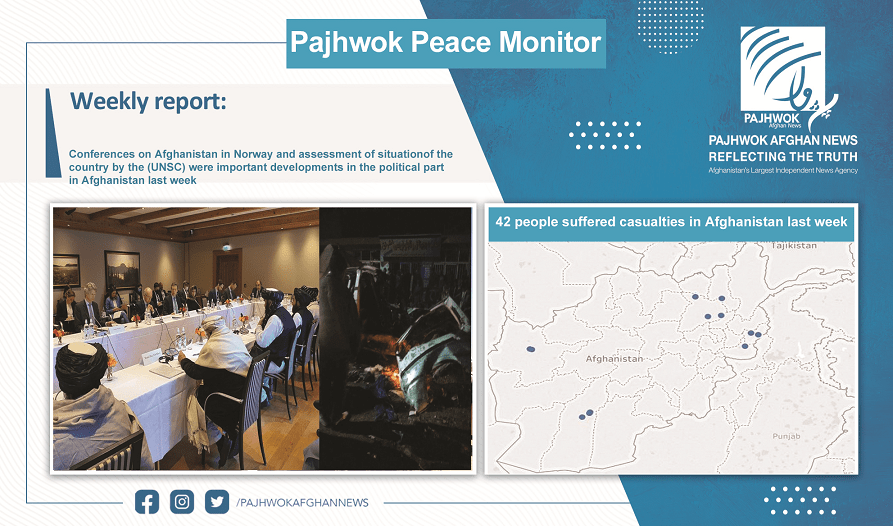 KABUL (Pajhwok): The international conference and meetings of Afghan delegation with representatives of many countries in Norway and assessment of the country’s situation by the United Nations Security Council (UNSC) were important developments in the political sphere in Afghanistan last week, when 42 people were killed or injured countrywide.

Last week, 27 people were killed and 15 others injured in separate incidents in Baghlan, Herat, Helmand, Kunar and Nangarhar provinces.

Reports say six civilians were killed when a vehicle struck a roadside bomb in Herat city, the capital of Herat province. The attack was claimed by ISIS militants.

Baghlan officials told reporters that 15 irresponsible armed men were killed and three others wounded during a clearing operation in Khost and Andarab districts of the province.

Unidentified gunmen killed the police chief for Tiora district of Ghor province in Herat and a child was killed in a rocket attack fired by Pakistani forces in Sarkano district of Kunar province.

Two children were killed and eight others were injured when improvised explosive devices exploded in Manogai district of Kunar province and Greshk and Nad Ali districts of Helmand province.

Reports say that the bodies of two young men were found in Baghlan-i-Markazi district of Baghlan province and in Greshk district of Helmand. 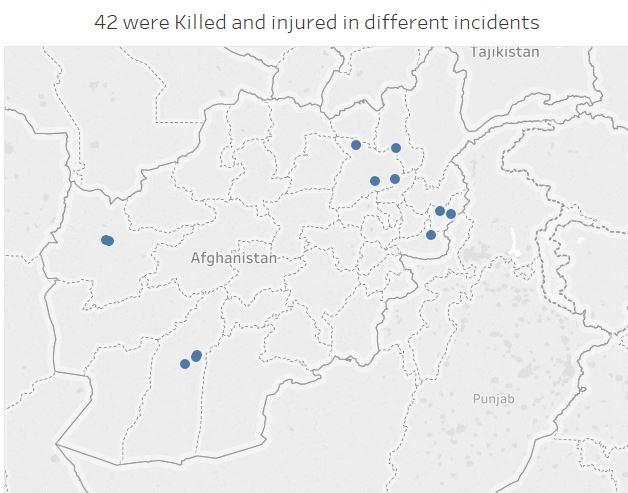 The previous week, 26 people were killed and 20 others were injured in separate incidents in Badakhshan, Baghlan, Balkh, Faryab, Kabul, Khost, Kunar, Laghman and Paktia provinces.

This comes as hundreds of people would get killed or injured during conflicts before the Taliban took power.

Afghanistan problems were discussed in a conference in Norwegian capital Oslo last week. Some analysts called the meeting a good start to address Afghanistan’s problems, but some European-based Afghans protested against it.

One of the meetings was between a delegation led by Mulavi Amir Khan Mottaki, the acting foreign minister of Afghanistan, and a number of Afghans living abroad. The participants of the meeting termed understanding and cooperation as the only solution to all the problems of the country.

The participants of the meeting submitted a draft plan to the caretaker government of Afghanistan. One of the key points of the plan was to start a joint political process in Afghanistan in cooperation with the United Nations to get out of the current crisis and declaration of a temporary constitution.

According to reports, the meeting discussed frozen assets of Afghanistan by the US, the formation of an inclusive government in the country, banking problems in Afghanistan and other important issues.

The US special envoy to Afghanistan during his meeting with the Afghan government delegation said that the international community should start a wide-range consultation process among Afghans for a political future.

He said that detentions should be stopped, girls’ schools be reopened, human rights respected, and ISIS should be fought. He said he had also talked to Afghans about humanitarian aid and release of frozen Afghanistan assets.

Acting Afghan foreign minister, Amir Khan Mottaqi, says that there were representatives in the Afghan government from every language and region of the country, and 500,000 officials were from the previous administration.

He said that efforts were being made to make the government more inclusive and all people feel represented in the country.

Last week, Mulavi Abdul Kabir, acting third deputy prime minister, called on the international community to choose the way of understanding instead of mounting pressure on the Afghan government.

Afghan foreign ministry said that participation of the government delegation in the three-day special session on the situation in Afghanistan in Oslo was full of achievements.

The ministry said that the meetings enabled the Afghan government to clarify its position, policies, achievements, future plans and resolve misunderstandings to most extent.

A UNSC meeting discussed Afghanistan’s frozen assets, respect of women rights in Afghanistan, humanitarian assistance to the Afghans, human rights and the fight against terrorism in the country.

The Taliban have repeated said they are committed to the Doha agreement with the US.

Japan has said it is making preparations to reopen its embassy in Kabul.

France has said it will continue providing humantarain assistance to the people of Afghanistan and wants to cooperate with the acting government.

Qatar announced reaching agreement with Turkey and the Afghan government on key issues and management of Kabul airport.

The Asian Development Bank last week confirmed $405 million assistance with Afghanistan for food security, health and education areas and said the money would be spent through four UN agencies.

UN secretary general’s special representative for Afghanistan has said the international community has agreed to continue humantarain assistance with Afghans.

The bank accounts of the Afghanistan Embassy in Washington have been closed, confronting Afghan diplomats with numerous problems.

Russia lashes out at US

Russia says the US policy towards Afghanistan was hypocritical.

Russia permanent representative to the UN in a statement had said the US made hypocritical efforts to show its policies successful about Afghanistan.

He said the US intervention in Afghanistan resulted in increased terrorism and drugs.

Women staged a protest in Kabul, asking the government to protect national and religious values and urging the US to unfreeze Afghanistan assets.