KABUL (Pajhwok): Last week there was a conference on Afghanistan in Geneva and Britain and China had positive messages for the Afghan caretaker government, but casualties in the country was higher than previous week as 12 people were killed and 18 others injured.

At least 12 people have been killed and 18 others injured in Afghanistan last week.

According to reports, a robber was killed and another was wounded in Qarabagh district of capital Kabul while protesters in Mirbacha Kot district of Kabul claimed that security forces killed a person and wounded another. One person was killed in a targeted attack in Pul-i-Sukhtar area of Kabul.

A woman and her two daughters were killed in the 7thpolice district of Kabul, and in the 6th police district, gunmen killed the head of a garment factory.

Reports say head of Sharia faculty at Ghazni University was found dead after being kidnapped last week, a drug addict was killed in Nimroz, and a tribal elder was killed in Garziwan district of Faryab. A child was killed and another was injured in a bomb blast in Sangin district of Helmand province.

Two children were injured in a mine blast in Chora district of Uruzgan province and a person was killedand 14 others injured in a blast in Qala-i-Naw city, the capital of Badghis province.

Reports show that a Ranger pickup of security forces was hit with a bomb in Panjshir province last week. Some locals claimed that four people had been killed in the blast, but provincial officials denied the claim and other sources also did not confirm the claim. 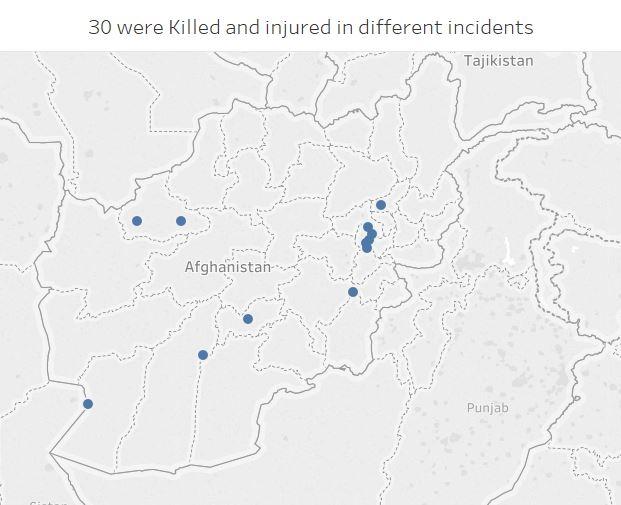 According to reports, only one person was killed across the country last week.

This comes as hundreds of people would have been killed or injured every week during past conflicts in the country.

Last week, a meeting was held in Geneva at the initiative of a non-governmental organization Geneva Call, which was also attended by a delegation from the caretaker government of Afghanistan.

The Afghan government said the delegation met with representatives of the International Committee of the Red Cross, Doctors Without Borders and the Global Fund, as well as British and Swiss officials.

A statement from Geneva Call said that both sides agreed to working to facilitate humanitarian services and aid and staff protection, maintain and develop health facilities, clear landmines and protect the environment and culture heritages and providing education facilities for Afghans.

“This conference and statement represent a step towards enhanced protection of civilians in Afghanistan, acknowledging that needs are dire and that increased support and collaboration is needed to alleviate the suffering of the Afghan population,” the statement said.

According to reports, a meeting of Afghanistan’s neighboring countries, including representatives of the new Afghan government, is scheduled to take place in China in late March this year.

Deputy Foreign Minister Inamullah Samangani earlier said that the caretaker government supported regional meetings on Afghanistan and considered them in the interest of the country.

The first meeting of foreign ministers of Afghanistan’s six neighboring countries, including Iran, China, Pakistan, Uzbekistan, Tajikistan and Turkmenistan, was held on September 8, which was chaired by Pakistan.

A second meeting of the kind was held in Tehran on October 27 in which Russia was also invited.

Britain, China and Russia’s interaction with the caretaker government

This comes as Former British Army Chief David Richards last week said, “It is time to accept that we have lost the war and we should work together with Afghan new leaders to protect Afghans. The West should accept the fact that the Taliban are now the government of Afghanistan.”

Russia’s special envoy for Afghanistan Zamir Kabulov said Russia was ready to help pave the way for the Taliban to respect human rights and form an inclusive government representing all ethnic groups.

While China assured regional countries that the Taliban wanted relations with the international community based on mutual respect.

President Joe Biden moved to freeze about $7bn in assets held in US financial institutions by the Afghan central bank in the wake of the Taliban takeover, as he vowed to direct $3.5bn to humanitarian aid and preserve the rest for families of victims of the September 11 terror attacks.

In an executive order signed on Friday, Biden directed “all property and interests in property” of the Afghan central bank in the US to be blocked and transferred to an account at the Federal Reserve Bank of New York, effectively cutting off the Taliban’s access to the US financial system.

However, Biden’s order drew strong reaction from the current and former government officials in Afghanistan, calling it injustice with the people of the war-torn country.

UN special representative for Afghanistan has said the European Union would provide five million euros for improvement of the humanitarian situation in Afghanistan. Turkey sent 750 tons of assistance to Afghanistan last week and 730 tons of wheat from China is on its way to the country.

Pakistan also contributed 31 tons of food and non-food items and the central bank confirmed receiving another tranche of 32 million dollars for humanitarian purposes.