IS-K attacks to ramp up in summer: Gen. McKenzie 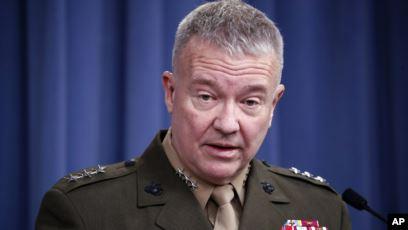 IS-K attacks to ramp up in summer: Gen. McKenzie

KABUL (Pajhwok): The commander of US forces in the Middle East and South Asia says without sustained pressure from American and Afghan forces, the IS affiliate is solidifying its foothold/

A media report quoted US Central Command’s head, Gen. Kenneth McKenzie, as saying; “We are concerned about the developmental trajectory of ISIS-K.”

Gen. McKenzie told lawmakers the US continued to watch carefully as ISIS attacks grew. “ISIS has been able to execute some high-profile attacks even in Kabul over the last several months. … It is my expectation that ISIS attacks will ramp up as we go into the summer.”

While IS-Khorasan remained dangerous, VOA reported, the group had not advanced its capabilities as quickly as some US officials initially feared.

The Pentagon’s third-highest ranking official had warned lawmakers in October that it appeared the group would be able to regenerate the capabilities needed to launch terror attacks on the West within six months.