KABUL (Pajhwok): At least 128 people were killed and 161 others injured in violent incidents last week, the deadliest week since the regime change last year in Afghanistan.

Last week, at least 128 people were killed and 161 others injured in violent incidents in Afghanistan. Casualties from natural disasters not included in weekly casualties figure

According to local sources, 41 people, including women and children, were killed and 21 others injured in the airstrikes. Six people were killed in Pakistan bombardment in Kunar province.

Last week, a police officer, Qaseem Qaeem, was killed in Kabul City, one person was injured in a roadside blast in Qowae Markaz area, six people were killed and 20 others injured in three separate bomb blasts in Dasht-i-Barchi and a child was injured in a blast in FazelBaig area of Kabul.

Reports showed 40 people were killed and 70 others injured in blasts and targeted attacks in the Qala-i-Zal and Imam Sahib districts of Kunduz province.

Twelve people were killed and 41 others injured in a bomb blast inside a mosque in Mazar-i-Sharif last week. According to reports, Daesh militant outfit claimed responsibility for the blast.

Former Balkh Governor Atta Mohammad Noor’s nephew was killed and another person was injured in Mazar-i-Sharif during a firefight with security forces.

According to reports, one body each recovered in Kandahar and Ghor provinces, ERW blasts killed five children and injure a sixth in Kandahar while unknown gunmen killed a man in Maimana, the capital of Faryab province.

In Maidan Wardak province, one man was killed last week due to family violence while a brother knifed her sister to death. 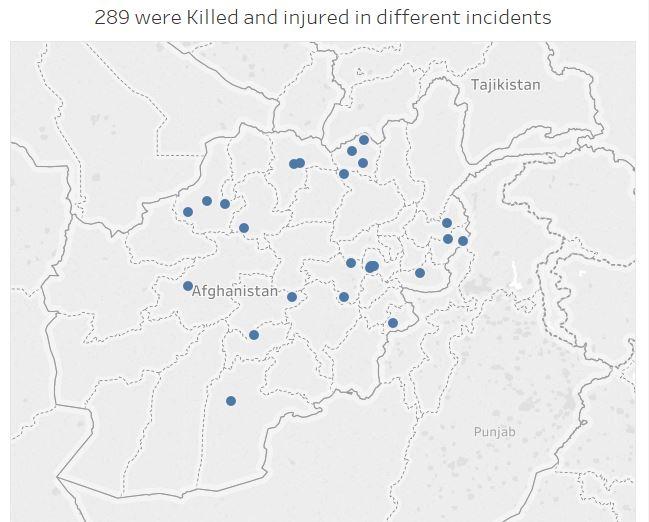 Twenty-six people were killed and three others injured in Afghanistan in the previous week.

This comes as hundreds of people would get killed and injured nationwide before the regime change last year in August.

According to Pajhwok statistics before last year’s regime change, 1,822 people were killed and injured in five weeks —- one month and five days. At that time casualties of armed personnel on both sides were very high but Pajhwok did have their recorded casualties’ figures.

Last week, Afghanistan’s Permanent Representative to the UN called Pakistan’s attacks on Khost and Kunar provinces a clear act of invasion of Afghan territory and formally complained to the UN Security Council about the matter.

Afghan foreign ministry summoned Pakistani envoy to Kabul last week over the attack and asked Pakistan to refrain from repeating such acts in the future.

Many Afghans in various parts of the country condemned Pakistan’s attacks and said they were ready to defend their country.

The United Nations Assistance Mission in Afghanistan (UNAMA) also expressed concern over Pakistan’s attacks on Afghanistan and civilian casualties caused by them, saying that civilians should not be targeted in any fight.

Attacks on civilians in Afghanistan last week have also been widely condemned on national and international levels.

A day earlier, a high-level delegation led by Acting Transport and Aviation Minister Mullah Hamidullah Akhundzada traveled to Qatar and discussed technical issues related to the contract of five international airports in Afghanistan.

British Charge de Affairs to Afghanistan, Hugo Shorter, during a meeting with acting Afghan foreign minister, Mualvi Amir Khan Mottaqi in Qatar, welcomed the ban on poppy cultivation in Afghanistan and said that his country was not supporting armed opposition against the current Afghan government.

Last week, the 25th package amounting to $32 million cash aid from the international community reached Kabul. Since regime change in Afghanistan, the total amount of cash assistance to the country reaches $724 million.

The US has said it is providing $48 million in aid to Afghan refugees living in Pakistan.

The United Nations Children’s Fund (UNICEF), on the other hand, said that it is committed to treating 1.1 million malnourished children in Afghanistan by the end of this year.

The Organization for Islamic Cooperation (OIC)’s Food Security in charge, YerlanAlimzhanulyBaidaulet, said that the organization would help raise funds for completion of unfinished projects in Afghanistan.

The UN last week said that the Ukraine war had not affected donors’ pledges to deal with the crisis in Afghanistan and other countries, and the organization expects more contribution from donors.

The Reuters news agency also reported that the World Bank was resuming work on three stalled projects in Afghanistan worth $450 million in areas of health, agriculture and basic necessities.

Call for reopening of girls’ schools

All girls’ schools were expected to open at the beginning of 1401 solar year, but the Afghan caretaker government delayed the schools’ opening until further notice.

The Ministry of Education says it has worked on a plan to reopen the schools after approval from the leadership of the government.

Closure of schools drew reactions at home and abroad.

The US State Department has said that if the caretaker government of Afghanistan continues its ban on secondary and high schools of girls, it would affect the country’s relations with the US and international community.

Last week, Mufti Mohammad Taqi Osmani, a prominent religious scholar and president of DarulUloom in Karachi in Pakistan, in a letter to the Islamic Emirate’s leadership asked for the reopening of all girls’ schools.

Last week, a number of civil society groups, political parties and tribal councils in Kabul termed closure of girls’ schools a great injustice towards the girls and asked for the reopening of all schools.