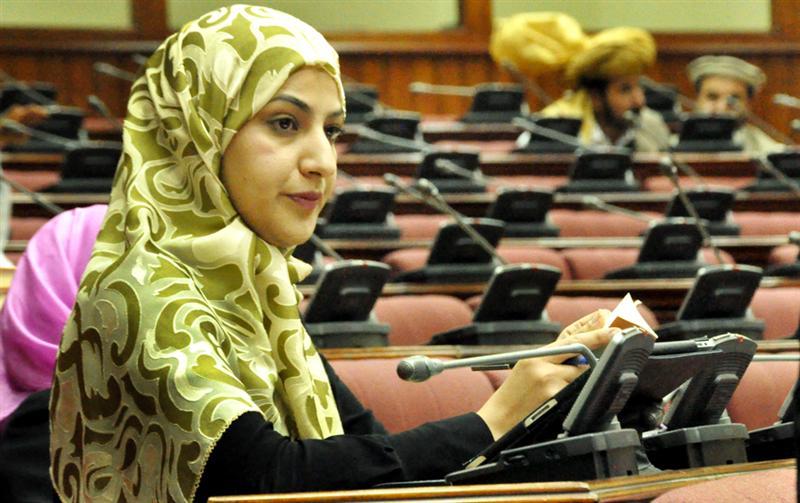 KABUL): Naheed Farid, the youngest member the lower house of Parliament, says that she won’t join any party or Parliamentary group because she does not want to want to work for their interests, but for the national interest.

She is not only the youngest MP, but one of the best educated among both the male and female lawmakers.

Naheed Farid, elected in the western province of Herat, was born there in 1984.  She graduated from the Mahboobai Herawi High School and in 2007, got a bachelor’s degree in law and politics from Herat University. Two years later she got her master’s degree in international relations from the George Washington University in the United States.

Naheed is currently a member of the international relations committee in Parliament. She previously served as a temporary secretary of the Wolesi Jirga, or lower house.

Her background includes work for different NGOs and the World Food Program (WFP). She still runs the family Farid Foundation, which, according to her, has provided stationery and clothes to 70,000 school children in Herat.

Farid says she wants to work for the national unity of Afghanistan, which is why she will not join a party. In her view, parties work for their own interests and not for the benefit of all Afghans.

She says: “Parliamentary groups and political parties have long worked for members of their language, region, tribe and even religion. I don’t want to belong to these kinds of parties.”

Currently 34 parties are licensed in Afghanstan and four parliamentary blocs have been formed in the Wolesi Jirga.

The MP form Herat has been fully supported in her political career by her husband and his family. They paid the entire 3 million afghani cost of her campaign, Naheed said. As part of her campaign her husband Farid, along with six doctors from the family, offered free medical checks and treatments.

Naheed said that people from all parts of society voted for her because they liked her opinions and her motto: “Careful selection, responsible parliament and wise government.”

The young MP, a mother of a daughter, said that she did not promise things which an MP cannot do: “I was not telling people that I would construct roads, bridges and culverts or any other works. That responsibility belongs to the [executive branch].”
Some people urge the MPs to construct roads, which she said is not in their competency. She added: “Some of the MPs behave like petitioners, writing letters for their constituents and walking from ministry to ministry to meet their requirements.”

She said such work does not match the MP’s role, but added that MPs should not be blamed because democracy is a new experience in Afghanistan.

Naheed Farid said that people from her province contact her through phone and Internet, and sometimes she visits those who are located in Kabul. She is proud to have 7000 friends on Facebook.

Many of her constituents tell her their problems related to schools and universities. She also presents their legal problems to the relevant authorities.

Naheed Fareed said that so far she has not been threatened by any militants, but as she is a woman and wants to serve the country from the bottom of her heart, she might find herself in a militant’s target.
She insists that the government should sit at the negotiating table with those Afghans who accept the country’s constitution. “All Afghans should join hands instead of creating problems for each other; they should work for their country to find a solution,” she said.

Mrs. Naheed expressed her concern about the special tribunal for election fraud and said: “I have never seen this kind of court in any constitution.”

The special court charged with investigating September’s parliamentary election has said that 62 of 249 sitting parliamentarians are not qualified to hold their seats, based on the results of a vote recount the court ordered under Article 22 of Afghan election law.

Naheed, told a Pajhwok Afghan News reporter in the Parliament conference room, said that she loves to watch documentaries and listen to classical music.  Every morning she starts with 90 minutes of exercises and then goes to work.

Her native language is Dari. She speaks also Pashtu, English and some German.