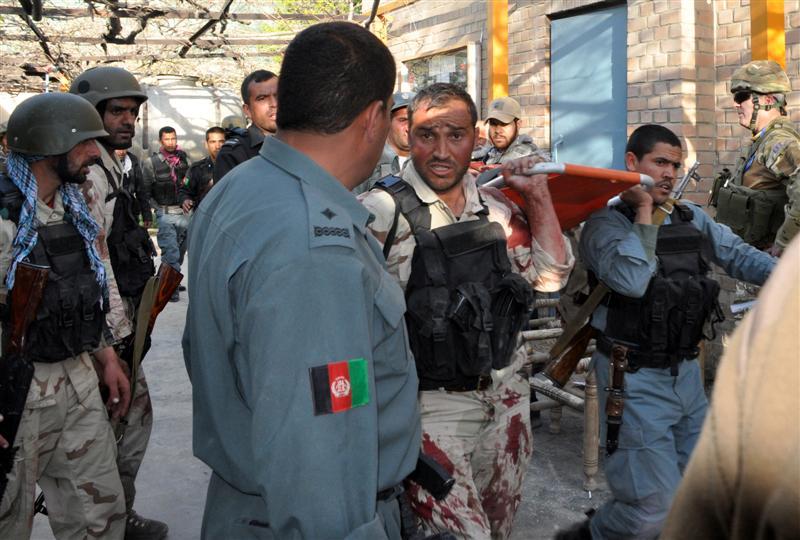 KABUL): Bursts of gunfire and several heavy blasts rocked the capital soon after suicide bombers entered a luxury hotel in a high-security neighbourhood on Sunday, officials and witnesses said.

Gunfire that began near the Ghazanfar Bank in the Wazir Akbar Khan diplomatic enclave in the heart of the capital at 2pm was still ongoing, said Mohammadullah, giving a witness account.

He told Pajhwok Afghan News that a bomb explosion rocked the area soon after the attackers stormed the Kabul Star Hotel in front of the Iranian embassy. Police are trying to deal with the situation.

Smoke billowed from a couple of buildings in the locality, where sirens wailed. Heavily-barricaded British and German embassies, as well as an American military centre and the Presidential Palace, are also located in the area.

The hotel caught fire after the sustained attack, but confirmation from security officials was not immediately availabale. Two rockets struck a guard tower of the British embassy.

The Quick Reaction Force (QRF) has partially cleared the building from where the militants fired rockets at British and German embassies, as well as the residence of Interior Minister Bismillah Mohammadi.

Amid Taliban’s claim of continued fighting, a police official said on condition of anonymity that QRF personnel were busy conducting a clearing operation.

They were trying to reach the fifth storey of the building, where the attackers were hiding, the source revealed. However, he had no information about casualties.

Dr. Kabir of Amiri, head of Kabul hospitals, said five wounded people had been evacuated to the Isteqlal Hospital. All the victims were civilians, he added, without commenting on their condition.

A US embassy spokesperson, Gavin Sundwal, said the embassy was currently in lockdown, following its standard operating procedures after hearing explosions and gunfire in the area.

“All its personnel are accounted for and safe. We have no reports of injuries to any COM personnel,” the spokesperson added.

Elsewhere, some assailants took up positions in an under-construction building in Darul Aman area, firing a volley of rockets and gunshots at the old parliament building.

“I was on my way to the office when gunfire rocked the locality,” said Hamidullah, a driver with the Food and Agriculture Organisation (FAO).

The rebels took out weapons from a mini-van that was parked in front of the under-construction building, according to a Pajhwok reporter. He said the vehicle was blown up after a while.

Zabihullah Mujahid added clashes between the assailants and security personnel were still underway. However, he had no casualty figures. German and British embassies and the ISAF headquarters were the prime targets, he concluded.

On the eastern outskirts of the capital, several militants attacked the Kabul Military Training Centre and a NATO military base in the Pul-i-Charkhi area.

The afternoon attack in the Paktiakot neighborhood of the 9th police district was carried out by three armed insurgents, , a security official said on condition of anonymity.