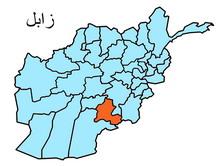 Sharafuddin, the Taliban shadow governor, and his military aide Murad Khan Kamil and three others, were killed in the Saro Nasar area of Quetta, the capital of Balochistan, the Zabul governor’s spokesman said.

However, Sharif Nasari neither gave a specific date for the killings nor details about the insurgents’ deaths in Balochistan, bordering Afghanistan and Iran.