Foreigners among 12 dead in Kabul attack 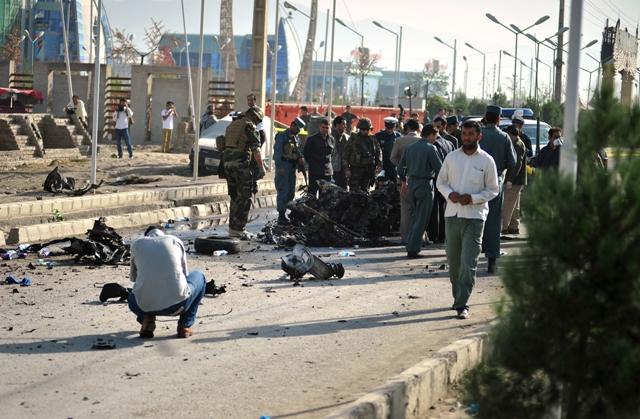 Foreigners among 12 dead in Kabul attack

KABUL (PAN): At least a dozen people, including eight foreign employees of an air cargo company, were killed and 11 Afghans injured in a suicide attack near the Kabul International Airport on Tuesday morning, police said.

The Ministry of Interior condemned the attack and said eight foreigners and four Afghan civilians were killed and 11 others wounded, who were evacuated to hospital by police.

The incident took place on a main road leading to the airport about 6:45am when a suicide bomber crashed his explosives-laden Toyota car into a van carrying employees of ACS, the deputy commander of 101st Asmayee Police Zone said.

Mohammad Daud Amin told Pajhwok Afghan News the dead included Russian and South African nationals, the Afghan driver of the van, and two civilians.  Another two Afghans were injured in the incident, he said.

The attack near a pump station and several wedding halls shattered the windowpanes of Mumtaz Mahal and the newly-built Khaleej hall.  Several vehicles were damaged in the vicinity.

“I saw some dead bodies of foreigners lying at the scene,” said Abdul Waris, who was walking to school when the incident happened.

Eng. Haroon Zarghoon, a spokesman for the Hezb-i-Islami Afghanistan faction led-by Gulbadin Hekmatyar, claimed responsibility for the attack, saying it was carried out by a teenage girl, named Fatima, in response to the American-made film denigrating Prophet Mohammad.

He claimed 14 foreigners were killed in Tuesday’s attack, in which 200 kilograms of explosives were used.

A spokesman for the South African foreign ministry told a foreign wire service that eight South Africans were among the dead. The men worked for a private aviation company.