7 civilians among 11 killed in ISAF raid 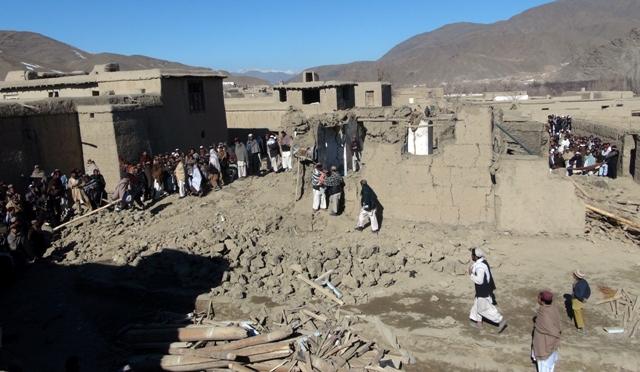 7 civilians among 11 killed in ISAF raid

KABUL): Seven civilians and four armed rebels were killed during a predawn operation in the Syedabad district of central Maidan Wardak province on Sunday, officials said.

The governor’s office said the raid was carried out by Afghan and foreign troops in Timorkhel and Hassankhel areas of the Taliban-infested district at around 2 am last night.

A statement from the governor’s house said four militants were killed in Hassankhel area.  Another insurgent, named Siddiqullah, was detained in Timorkhel village.

The guerrillas, hiding in a mosque, were killed when their suicide vests exploded, according to the statement, which said the worship place was also damaged in the explosion.

Seven civilians, including a woman, were also killed while trying to recover the bodies. Another civilian was injured in the incident.

Shahidullah Shahid, the governor’s spokesman, said they had sent a delegation to the area to investigate the incident and submit its findings.  He condemned the civilian deaths, caused by any side, and extended his condolences to the victims’ families.

In response to an emailed query from Pajhwok Afghan News, the NATO-led force said a large cache of weapons and explosives was discovered by the security force during the operation.

But resident Abdul Ghaffar told Pajhwok Afghan News that coalition troops conducted the raid on the mosque where worshippers were offering morning prayers.

The foreign forces also fired at rescuers, who were retrieving the bodies and injured from the debris, he said, claiming 15 civilians were killed.

Another resident, Jawed Hassani, said American troops continued the operation in Hassankhel  until morning. He claimed several civilians were killed and injured.

Haji Qudus, his wife, son and a grandson were killed during the raid. A schoolteacher, Muzamil, and two of sons were also killed, he said.

A public representative, Sher Shah Bazoon, said they had received conflicting reports about the incident. He quoted some residents as saying the area was bombarded. But others said foreign troops carried out ground operations, according to the provincial council member.